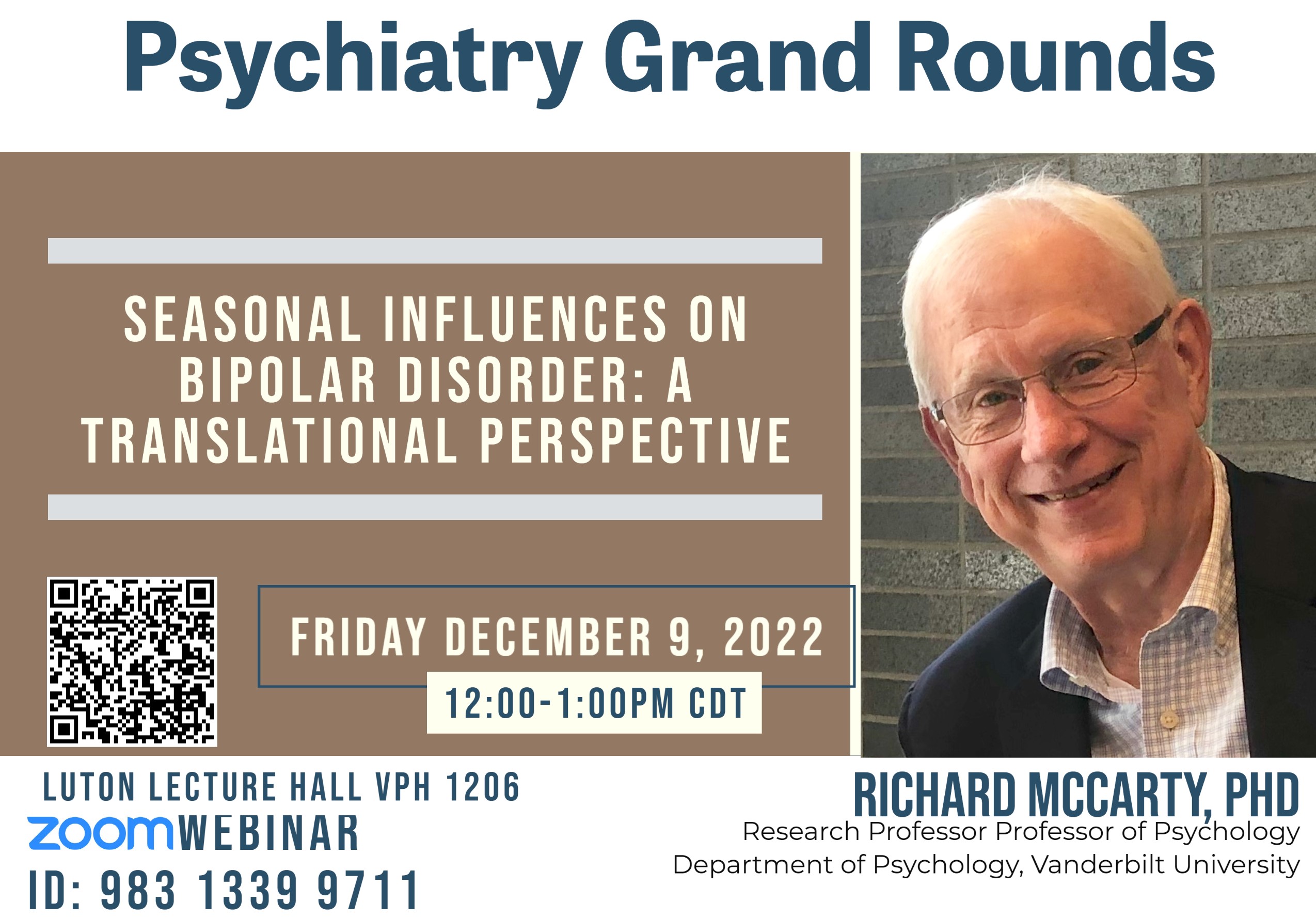 This presentation is designed to help the learner:
1.    Describe the possible adaptations required when early humans migrated from equatorial Africa into the temperate regions of Europe and Asia.
2.    Discuss how seasonal rhythms in the light-dark cycle influence the expression of the bipolar phenotype.
3.    Analyze how translational animal models may contribute to a deeper understanding of the molecular mechanisms associated with bipolar disorder.

Why has bipolar disorder been maintained at a stable rate in most ethnic groups when it is so deleterious? An evolutionary perspective provides some important insights into this conundrum, including exposure to seasonal rhythms in the light-dark cycle as early humans migrated out of equatorial Africa into Europe and Asia. How might researchers exploit these findings and develop animal models to elucidate the molecular mechanisms underlying the expression of a bipolar phenotype..

Dr. Richard McCarty received his B.S. in Biology (1970) and M.S. in Zoology (1972) from Old Dominion University and his Ph.D. in Pathobiology (1976) from The Johns Hopkins University. He was awarded a Pharmacology Research Associate Training Program fellowship to support postdoctoral training in neuroscience at the National Institute of Mental Health, where he was an officer in the Commissioned Corps of the U.S. Public Health Service.
Professor McCarty started his academic career in the Department of Psychology at the University of Virginia, where he rose through the ranks to become Professor and Chair of the Department. After 20 years at the University of Virginia, he was recruited to the American Psychological Association to serve as Executive Director for Science from 1998-2001.
In 2001, Professor McCarty was recruited to Vanderbilt University, where he was appointed Professor of Psychology and Dean of the Faculty of Arts and Science. After 7 years as Dean, he was appointed Vice Chancellor for Academic Affairs and Provost by then-Chancellor Nicholas S. Zeppos. He served as the chief academic officer of Vanderbilt University from July 2008 until June 2014. After a sabbatical leave, Professor McCarty joined the Department of Psychology and taught courses related to stress and health through a first-year writing seminar and a seminar for advanced undergraduates. Over the years, Professor McCarty’s research program was focused on the physiology of stress. He has published 200 peer-reviewed articles and books chapters, co-edited 8 volumes, and published 2 books.

CME/CE credit for Psychiatry Grand Rounds is only available during the live feed time and for a brief time immediately following. The code for this week's session is displayed at the opening and closing of the meeting and also in the Chair's Office Zoom Account Name during the meeting.

For CME/CE information about this session, please visit:

This talk is sponsored by the
Department of Psychiatry and Behavioral Sciences  This educational activity received no commercial support.