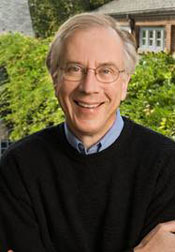 Bio:
In 1978, Thomas R. Cech joined the faculty of the University of Colorado Boulder, where he became a Howard Hughes Medical Institute investigator in 1988 and Distinguished Professor of Chemistry and Biochemistry in 1990.

In 1982 Dr. Cech and his research group announced that an RNA molecule from Tetrahymenareproducing system consisted of RNA alone.

Dr. Cheh's work has been recognized by many national and international awards and prizes, including the Heineken Prize of the Royal Netherlands Academy of Sciences (1988), the Albert Lasker Basic Medical Research Award (1988), the Nobel Prize in Chemistry (1989), and the National Medal of Science (1995). In 1987 Dr. Cech was elected to the U.S. National Academy of Sciences and also awarded a lifetime professorship by the American Cancer Society.