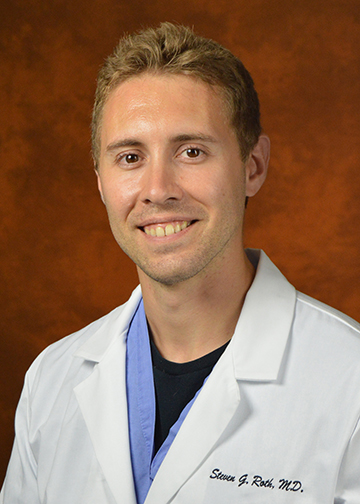 Steven G. Roth, MD was born and raised in Baltimore, Maryland. He completed his undergraduate studies in Bioinformatics and Computational Biology at University of Maryland Baltimore County (UMBC). Following graduation, he spent several years working as an intraoperative neurophysiology technologist. His passions for teaching and neuroscience eventually drove him to pursue higher education. He earned his Masters in Physiology at Georgetown University and matriculated at Albany Medical College in 2012. During his four years in New York, he participated in clinical outcomes research involving electrophysiology and neuromodulation for chronic pain. He was elected to Alpha Omega Alpha honor society and graduated magna cum laude in 2016. He then moved to Nashville to begin his neurosurgical training at Vanderbilt University Medical Center.

Steven plans to graduate in 2023. He enjoys spending time with his wife, Christine, and his golden retriever, Wallace. He also enjoys snowboarding, reading, and is an avid fan of the Baltimore Ravens