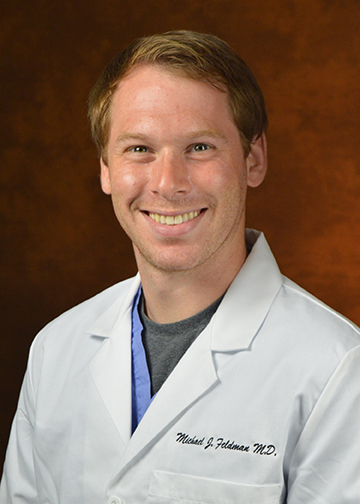 Michael Feldman, MD grew up in Chevy Chase, Maryland and spent a year after high school volunteering in Israel. He attended college at the University of Rochester where he graduated in 2011 magna cum laude with a Bachelor of Arts in both History and Cognitive Science and was elected to Phi Beta Kappa. He remained at the University of Rochester for medical school where he graduated in 2016 with Distinction in Research and a citation as a Medical Educator. During medical school he was selected to participate in the National Institutes of Health's Medical Research Scholars Program, where he studied potential therapeutic targets for both medulloblastoma and hemangioblastoma. In residency, he completed a fellowship in endovascular neurosurgery with clinical and research foci in stroke as well as pediatric vascular diseases and retinoblastoma. He has also worked in organized medicine as a board of trustee’s member for the Tennessee Medical Association as well as being selected as a CSNS and Washington Committee Fellow within organized neurosurgery. He plans on pursuing further fellowship training in pediatric neurosurgery