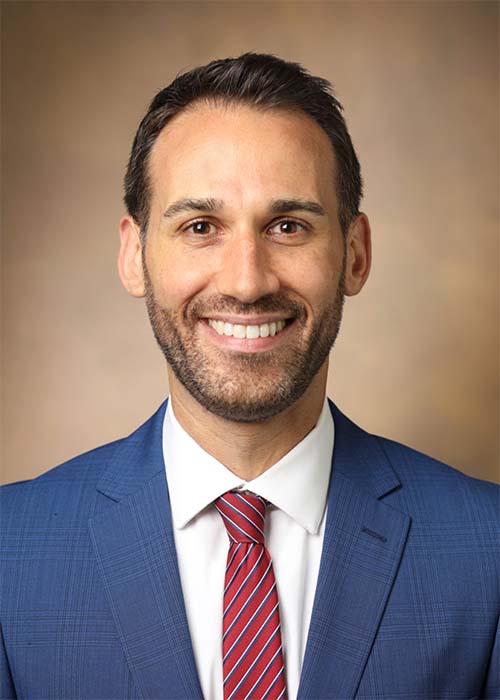 Dr. Terry joined our faculty as an Assistant Professor and Clinical Neuropsychologist in the Department of Neurological Surgery. His previous role was as an Assistant Professor in the Department of Physical Medicine and Rehabilitation at Harvard Medical School within the Spaulding Rehabilitation Network and Massachusetts General Hospital. Clinically, he specializes in the assessment of neurocognitive and emotional difficulties, with additional services related to the management of concussions/traumatic brain injuries. His research focus spans several topics within neuropsychology and cognitive and behavioral neurology, including sports medicine, concussion and its comorbid conditions, rehabilitation, and long-term outcomes.

Research
Dr. Terry has developed a programmatic research interest in the risk factors for sustaining a concussive injury and experiencing a complicated recovery, with a particular focus on psychological constructs, as well as the neurobiological substrates of the long-term effects of concussions. Dr. Terry’s investigative and management role in a grant award titled “The Spectrum of Concussion” provided a framework to examine acute effects and functional recovery, treatment and rehabilitation of athletes who are slow to recover, possible long-term effects on brain health, and rehabilitation of retired amateur collision sports athletes. Additionally, Dr. Terry served as a Co-Investigator and the Project Manager of Brain and Behavior team for the Harvard Football Players Health Study, which examines the health of retired National Football League players across several specialties including neurology, sports medicine, rehabilitation medicine, cardiology, and other relevant areas to injured athletes.

He has co-authored over 65 peer-reviewed journal articles. Among his recent journal publications are: Football is not Associated with Later-in-Life Cognitive or Mental Health Problems, Frontiers in Neurology, section Neurotrauma; Examining the Research Criteria for Traumatic Encephalopathy Syndrome in Middle-Aged Men from the General Population who Played Contact Sports in High School, Frontiers in Neurology, section Neurotrauma;  Sleep Insufficiency and Baseline Preseason Concussion-like Symptoms Reporting in Youth Athletes, Clinical Journal of Sport Medicine.

Memberships, Awards and Honors
Dr. Terry is a licensed clinical psychologist in the State of Tennessee and in the Commonwealth of Massachusetts. He is a member of the International Neuropsychological Society, National Academy of Neuropsychology, Sports Neuropsychological Society, and the American Psychological Association. He was previously an Assistant Professor in the Department of Physical Medicine and Rehabilitation, Spaulding Rehabilitation Hospital, Massachusetts General Hospital, Harvard Medical School. While training, he was the recipient of a Research Assistantship at the Bioimaging Research Center, University of Georgia, Athens, GA.

Education
Dr. Terry received his Bachelor of Science from Tufts University, Medford, MA and earned an MS and PhD in clinical psychology (neuropsychology specialization) at the University of Georgia. Dr. Terry completed his internship at the University of California, Los Angeles in adult neuropsychology. He then completed a two-year clinical-research fellowship in neuropsychology (with a specialization in concussion, mild traumatic brain injury, and sports neuropsychology) in the Department of Physical Medicine and Rehabilitation at Spaulding Rehabilitation Network, Massachusetts General Hospital, Harvard Medical School, Boston, MA.