As a graduate of Vanderbilt University School of Medicine, Dr. Aaron McMurtray welcomed the opportunity to return to his alma mater as a faculty member after several years of training and working on the west coast. His work with his wife in their small drug development company complements his clinical responsibilities at VUMC. Most of Dr. McMurtray’s free time is dedicated to his family, which might include a stop for Blue Monkey Shaved Ice after a trip to Percy Priest Lake.

Tell us about your background and how your path led to Vanderbilt?

I grew up outside of Seattle, and I went to college in California. I’m a Vanderbilt alumnus for medical school, graduating in 2000. After Vanderbilt, I went to Los Angeles for residency at Harbor-UCLA, which is the county hospital, and then did a fellowship in Behavioral Neurology also at UCLA. After my fellowship, I was offered a job at the University of Hawaii working on dementia-related research projects. I worked there for about three years, I met my wife out there and we got married.

Then an opportunity came up with UCLA at another county hospital in Ventura; they asked me to come back and set up a traumatic brain injury program for them. I talked it through with my wife, and we decided we’d rather live in California, so we went back and I set up the head injury program for them there. That was an interesting time. The hospital was in competition with a private hospital, as both were vying to be designated the trauma center for the region. Our hospital, Ventura County Medical Center, was successful, and became the trauma center for the region. I was at that hospital for about three years.

Then the director of the dementia care program at Harbor-UCLA, Dr. Terry Edwards-Lee, retired and moved to Brentwood, Tennessee; they asked me to come back and run the dementia program. I did that for seven years, which led to an opportunity at the UCLA main campus, so I ran the program there for three years until the opportunity at Vanderbilt came up.

What attracted you to Vanderbilt?

I got the call kind of out of the blue. I received a message from Dr. David Charles saying Vanderbilt had recently received a large grant to help set up a dementia center. He was wondering if we had recent graduates out of the UCLA behavioral neurology fellowship program (which I was working with at the time) who might want to work at Vanderbilt. My first thought was, “Recent grads? I would be interested!” I had loved it at Vanderbilt and in Nashville as a student—experiencing four seasons, the green environment, the quality of life, the way people interact, and the way the city is—it’s very different from Los Angeles. I didn’t appreciate it as much as a student. But as someone thinking about where I wanted to live and raise children, Nashville and Vanderbilt sounded great.

What initially interested you in Behavioral Neurology and Neuropsychiatry?

It was really the chance to get to help people who were dealing with problems that were not well-understood and didn’t have good treatments available. The causes for a lot of these disorders, especially neurodegenerative dementia, aren’t well-understood, and they have no real therapy besides symptomatic medication. There’s lots of potential to do good and to help people, as well as for research in this field. With that set of disorders [as seen in Behavioral and Cognitive Neurology], you have to be really hopeful for the future that something will be created or discovered, because right now there really isn’t anything.

What are some of your research interests and overarching career goals?

Most of the research I’ve done over the years has been clinically-oriented—describing differences in patient groups, looking at characteristics of different patient populations, etc. There weren’t many effective therapies for the kinds of disorders I was seeing in clinic.

My wife formed a company to do small-drug discovery. She recently applied for an SBIR [Small Business Innovation Research] grant from the National Institutes of Health that was recently issued a notice of intent to fund. My research efforts now are supporting her with that endeavor. The grant is specifically to develop new therapeutics for the kinds of disorders I encounter in clinic.

What kind of career would you have if you weren’t a neurologist?

I would probably be doing something pretty similar. In college I majored in chemistry and biology. I have always liked the sciences. I probably would have gone into medicine from a chemistry angle, going into small drug development or something like that.

How do you like to spend your free time?

We have two young children, ages ten and eight. We do a lot of family things—basketball, jogging, etc. We like to walk the dog as a family.

What are some of your go-to spots in Nashville?

It’s interesting because I got the perspective as a student and now I’m getting it as a family. Percy Priest is beautiful, and that’s changed quite a bit in the last 20 years or so. In terms of restaurants, there’s one called The Perch near where we live which is really good for breakfast. For the kids, they love Blue Monkey Shaved Ice.

Any fun facts about you that might surprise your colleagues?

When I was a student at Vanderbilt I got interested in sailing on Percy Priest lake, so I bought a sailboat and I would go out on the lake. When I finished medical school, I put it on the trailer and drove it out to Los Angeles, and used it to explore the islands off the coast.

With my older son we’ve been watching a sword-fighting/monster show on Netflix called Artemis Foul. With the younger one, it’s Harry Potter. 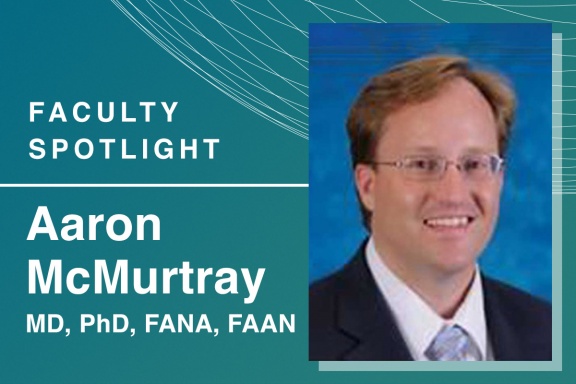