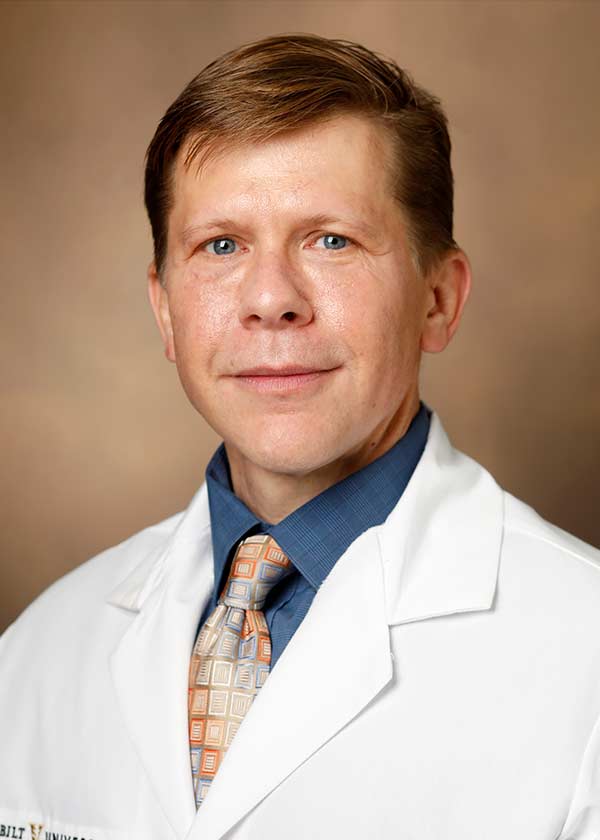 Dr. Lagrange is Associate Professor of Neurology at Vanderbilt University Medical Center, specializing in epilepsy. In addition to his laboratory and clinical research activities, Dr. Lagrange is involved in the teaching and mentoring of residents, fellows, graduate and undergraduate students, and also serves as ad hoc reviewer for Epilepsia, Epilepsy & Behavior, Epilepsy Research, Journal of Physiology, Neurology and Neuropharmacology.

Dr. Lagrange’s honors include being the past recipient of a William Penry Epilepsy Minifellowship (2000) and the American Academy of Neurology Residents Scholarship (2001). He is also a fellow of the American Epilepsy Society and American Neurological Association.

Dr. Lagrange earned BS degrees is both Chemistry and Biology (with Honors) at the University of Washington in 1987. He earned a PhD in Physiology and Pharmacology in 1996 and a MD in 1997, both at the Oregon Health Sciences University, while supported by a NIMH pre-doctoral NRSA fellowship. The next year he did an internal medicine internship at Saint Joseph Mercy Hospital in Ann Arbor, MI, followed by Neurology residency (1998-2001) and Clinical Neurophysiology Fellowship (2001-02) at the University of Michigan, Ann Arbor. He joined the faculty at Vanderbilt as Assistant Professor in 2002, and was later promoted to Associate Professor.

Dr. Lagrange’s lab uses electrophysiological techniques with brain slices and immortalized cultured cells to study the tuning of inhibitory neurotransmission during normal brain function and in disease states, including epilepsy. GABA is the primary inhibitory neurotransmitter in the adult brain and is critical for normal brain function. However, in the developing brain, GABA acts as an excitatory signal that directs normal neuronal migration and synaptogenesis. Dr. Lagrange’s lab has found that a predominant GABA receptor expressed primarily during early life is subject to RNA editing in a developmentally regulated fashion. By introducing a single amino acid change in a key portion of these GABA receptors, RNA editing leads to significant changes in receptor function, thereby producing a brief window in late embryogenesis/early postnatal life in which GABA causes the prolonged/slow depolarizations that are important for the subsequent formation of both excitatory and inhibitory connections later in life.

Dr. Lagrange's clinical interest is in the treatment of women with epilepsy. It has been known for a few years that some of the medications used to treat epilepsy may increase the risk of having a child with congenital malformations. Unfortunately, these teratogenic drugs are also widely used for a number of other neurological and psychiatric disorders, such as migraines and bipolar disorder. Alarmingly, recent work has suggested that children exposed to a subset of these drugs in utero have reduced IQ later in life, and an increased incidence of neurodevelopmental disorders such as autism. Further animal work has suggested that these poor cognitive outcomes may involve subtle cortical malformation/laminar disruption, which are thought to be mediated by the GABA modulatory nature of these drugs. Dr. Lagrange's lab is working to understand the role of specific GABA receptors in brain development and how these processes are regulated during normal development, as well as how they may be disrupted by disease states and medications.

Other areas of clinical interest and teaching include autoimmune epilepsy, advanced functional imaging for epilepsy and post-traumatic epilepsy.

Read more about Dr. Lagrange’s research at his lab website.