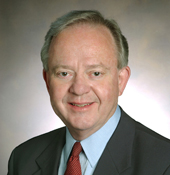 William O. Whetsell, Jr., M.D. is Professor Emeritus of Pathology, Microbiology and Immunology. Whetsell, a native of South Carolina, graduated from Wofford College, Spartanburg, South Carolina in 1962 (B.S. degree) and from the Medical University of South Carolina, Charleston, in 1966 with an M.D. degree and an M.S. degree in neurobiology. He pursued post-graduate training at Columbia University Medical Center in New York City with a post-doctoral fellowship in neuroscience and residencies in clinical neurology, anatomic pathology and neuropathology. He served in the U.S. Navy (1967-1969) as Lt. Commander at the Naval Aerospace Medical Center in Pensacola, Florida.

His research career has focused on mechanisms of human neurodegenerative diseases including Huntington's, Parkinson's and Alzheimer's diseases. He, along with his long­time collaborator, Dr. Robert Schwarcz of the University of Maryland, was a co­discoverer of quinolinic acid as an endogenous excitotoxic substance in the human brain, a substance that has been implicated subsequently in Huntington's, Parkinson's, Alzheimer's, temporal lobe epilepsy and AIDS encephalopathy.

Dr. Whetsell's continuing research has demonstrated mechanisms of neurodegeneration relating to chronic excitotoxicity and metabolic stress in the brain. He has maintained a research laboratory at Vanderbilt since 1983 supported by grants from the National Institutes of Health and several American and European pharmaceutical companies. His published works include more than 100 peer-reviewed articles and book chapters as well as numerous abstracts of work he has presented at national and international meetings, symposia and guest lectureships in the U.S., Italy, France, England, Sweden and Japan over the last three decades.

In his teaching endeavors, Dr. Whetsell taught medical students in the Neurosciences Courses at Mt. Sinai and the University of Tennessee as well as residents and postdoctoral fellows in his laboratories at both institutions.

At Vanderbilt, he designed and developed the current curriculum for the neuropathology teaching component of the medical student course in Pathology; he has also taught in the Medical Neurosciences Course, graduate student elective courses in Psychiatry, an honors course for undergraduates at Belmont University, and a course on the human brain and aging for the Retirement Leaming Program. He has participated in and directed training of residents in neurology, neurosurgery and pathology at Vanderbilt as well as neuropathology fellows, postdoctoral fellows and Ph.D. students in his laboratory since 1983.

In addition to professional activities, he has participated in a variety of local and regional community activities and has received several awards including the Phi Beta Kappa Alumnus Award from Wofford College, Distinguished Alumnus Award, Medical University of South Carolina and the Jack C. Massey Community Leadership Award in Nashville.