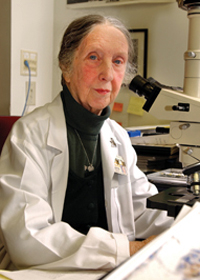 A 1943 graduate of the Vanderbilt College of Arts and Science, Stahlman earned her medical degree from Vanderbilt in 1946, then served as an intern at Lakeside Hospital in Cleveland, as a pediatric intern at Children's Hospital in Boston, as assistant resident on the pediatric service at Vanderbilt, as an exchange fellow at the Royal Caroline Institute in Stockholm, and as a cardiac resident at La Rabida Sanitarium in Chicago. She became an instructor in Pediatrics at Vanderbilt in 1951.

Her initial research was in pediatric cardiology, but in the late 1950s and early 1960s, she moved in a direction that changed her life and the lives of thousands of premature babies and their parents. When a baby girl with severe hyaline membrane disease was born in October of 1961, Stahlman's research was confronted with a life or death situation. The girl's parents gave permission for a bold experiment at the time - helping their daughter breathe through use of a respirator that had been scaled down for premature baby size. The ability to monitor the respirator's effect on blood oxygen with umbilical catheters made respirator therapy possible.

This interest in the respiratory problems of premature newborns along with a National Institutes of Health grant led Stahlman to put into place the first modern neonatal intensive care unit in the world.She was also involved in initiating the regionalization program of high-risk newborn care in Tennessee in 1973. She started Vanderbilt's Neonatology Fellowship Training Program and has helped train more than 80 post-doctoral fellows from about 20 countries in research and high-risk newborn care.

Dr. Stahlman continues as Professor of Pediatrics and Pathology and also collaborates with researchers at Cincinnati Children's Hospital Medical Center to identify the genetic underpinnings of respiratory distress syndrome, a leading killer of premature infants.

Immunohistology and electron microscopy of  immature  lungs of mice and humans.