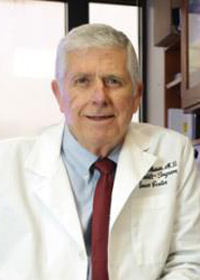 Accumulating data indicate that the stroma can play a critical role in cancer initiation and progression. TGF-beta signaling in both epithelial and stromal cells appears to be a key regulator of the stromal microenvironment. There is now compelling evidence from transgenic mouse studies and analyses of mutations in human carcinomas indicating that the TGF-beta signal transduction pathway is tumor suppressive. Studies of human tumors have demonstrated inactivating mutations in human tumors of genes encoding proteins involved in TGF-beta signal transduction, including DPC4/Smad4, Smad2, and the type I and type II TGF-beta receptor (TßRI and TßRII, respectively). However, there is some evidence that TGF-beta signaling can promote tumor progression in the later stages. In order to examine the roles of TGF-beta signaling in cancer more closely, we have generated mice with loxP sites flanking exon 2 of the type II receptor gene, Tgfbr2, and crossed them with mice expressing Cre driven by different epithelial specific promoters. Loss of TGF-beta signaling in six different epithelial cells gave a minimal phenotype. However, when challenged with oncogene expression or tumor suppressor gene impairment, there was rapid development of invasive and metastatic carcinomas supporting the hypothesis that epithelial cell autonomous TGF-beta signaling is tumor suppressive in both early and late stages of carcinogenesis. One mechanism appears to be enhanced expression of chemokines by Tgfbr2 null carcinoma cells with resultant recruitment of bone marrow derived cells that express abundant TGF-beta and MMPs in the tumor microenvironment and promote invasion and metastasis.

In contrast to the epithelial cell knockouts that gave a minimal phenotype, knockout of Tgfbr2 in stromal fibroblasts gave a striking epithelial phenotype in the mammary gland, prostate and forestomach, including epithelial pre-neoplasia and invasive carcinomas. One mechanism identified was paracrine stimulation of carcinoma cells by HGF, MSP and TGF-alpha. Another mechanism appeared to be over expression of chemokines by the knockout fibroblasts with recruitment of bone marrow derived cells. Thus, TGF-beta signaling in fibroblasts modulates the growth and oncogenic potential of adjacent epithelia in selected tissues. The data indicate that TGF-beta signaling is a major regulator of chemokine secretion and resultant bone marrow cell infiltration and that targeting pathways that inhibit bone marrow cell differentiation or chemokine receptors may be useful in both therapy and prevention of cancer.