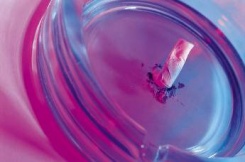 Medication is commonly used to help smokers quit.  There is no magic formula to determine who needs medication.  If you smoke more than a pack a day, have had significant withdrawal symptoms during previous quit attempts, or have irresistible cravings for cigarettes, you should consider one of the following medical options.

Nicotine patches are applied to the skin and nicotine is absorbed slowly to provide a steady release of nicotine to the brain.  This reduces symptoms of nicotine withdrawal such as irritability, nervousness, and difficulty concentrating.  By gradually lowering the dose of the patch over several weeks, you can gently lower nicotine levels in your brain and avoid the worst of the withdrawal symptoms.  Never smoke while using a nicotine patch, as this can deliver a dangerous amount of nicotine to your heart and brain.  Side effects of nicotine patches include skin irritation and nightmares.  Skin irritation is reduced by changing the patch site every day.  If you experience nightmares, remove the patch before you go to bed and apply a new patch first thing in the morning.

Chantix is a relatively new drug that is safe and effective at helping smokers quit.  Chantix works on the nicotine receptors of the brain.  Because of the way Chantix works in the brain, it should not be combined with nicotine replacement therapy.  Some patients taking Chantix have experienced depression, so be sure to talk with your healthcare provider about possible side effects.

Buproprion is a medication also known as Zyban or Wellbutrin.  Buproprion is used as an antidepressant as well as a smoking cessation medicine.  It is safe and effective and helps reduce urges and cravings.  Buproprion can be combined with nicotine replacement therapy.