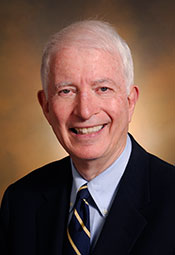 Professor of Physics and Astronomy
Professor of Radiology and Radiological Sciences
norman.tolk@Vanderbilt.Edu

Norman Tolk was born in Idaho Falls, Idaho. He earned his AB degree in physics from Harvard College in Cambridge, Massachusetts, and a Ph.D. degree in atomic physics from Columbia University in New York City. Following a postdoc at Columbia, he joined AT&T Bell Laboratories in New Jersey where he carried out experimental research on surface and interface physics using directed-energy photon and particle beams.

In 1984, he move to Vanderbilt University as a full Professor of Physics in the Department of Physics and Astronomy. He also became an Adjunct Professor of Physics at Fisk University. Early in his carreer at Vanderbilt, he headed the highly multidisciplinary group representing medicine, engineering biology and physics that wrote the successful proposal to fabricate a Free-Electron Laser (FEL) at Vanderbilt, following which he became acting director of the newly formed FEL center. This initiative resulted in the construction of a new building on the Vanderbilt campus solely dedicated to FEL research. In 1987 Dr. Tolk received the Alexander von Humboldt Senior Scientist Award which provided the opportunity to perform research at the Free University in Berlin which happened to coincide with the fall of the Berlin Wall. Professor Tolk recently served as Vice Chair of the Faculty Senate and on an annual basis conducts performances of Handel’s Messiah which is a community event involving many Vanderbilt and community musicians.

Dr. Tolk is a Fellow of The American Physical Society, holds 8 patents, and is the author or co-author of 3 edited books and more than 270 papers. His research involves non-linear laser-surface and laser-interface interactions, ultra-fast vibrational and electronic vibrational processes at surfaces and interfaces, spin dynamics, desorption induced by electronic and vibrational processes, and atomic collision physics.