Vanderbilt Academy for Excellence in Education

The following story originally appeared online on April 27, 2017, by the Vanderbilt Academy for Excellence in Education.

Lori A. Deitte, M.D., was the recipient of the 2017 Geoffrey David Chazen Award for faculty and was announced at the annual dinner of the Vanderbilt Academy for Excellence in Education (AEE) on April 24, 2017.

The Geoffrey David Chazen Award was first awarded in 1998. The award was established to honor the memory of Dr. Chazen, who received his MD at Vanderbilt. This award for innovation in medical education was established to recognize a student, resident, fellow or faculty member who has made special contributions to the educational programs of the VUSM through the development and implementation of effective innovation in educational approach.

Although some of the early recipients of the Chazen Award were faculty members, over time the award transitioned to a student award. At the inspiration of Dr. Bonnie Miller and with the grateful support of the Chazen family, two Chazen awards, one for students, which is given out at Class Day and awarded by a different mechanism, and a second award for faculty members have been established. This faculty award is administered by the Academy, but is open to all members of the VUSM faculty.

Dr. Deitte is a Professor of Radiology and is Vice Chair of Education in the Department of Radiology. The Chazen Award is being given for Dr. Deitte’s work to develop and implement “QuizTime,” which is an innovative web-based smartphone application for asynchronous workplace-based education. The application was piloted with Radiology residents in 2016 and ~86% of residents opened the daily questions and >70% answered them. This program is being translated to other resident programs as well as to student clerkship programs. 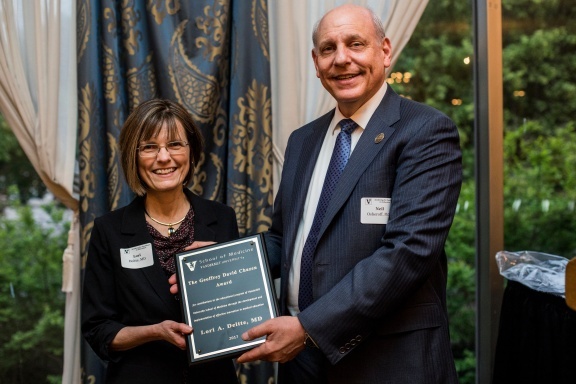