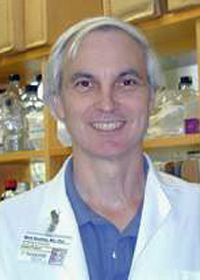 We investigate mechanisms by which signaling and transcription factors regulate cell growth, differentiation, and survival. The lab dissects these questions through the integration of genetic manipulations, biochemical studies, and analyses of function in immunity.

Potential projects (2016):
1. Signaling and immune function mediated sensors of the cellular environment (metabolism, oxygenation, nutrients) and metabolites. Active work in this area includes dissection of how AMPK, a sensor of energy deficiency, hypoxia-induced factors and their regulators, and the Akt / mTOR axis of serine-threonine kinases impact the qualities of humoral immunity and immune memory. We have identified evidence of an important role for a novel complex involving the kinase mTOR - "mammalian target of rapamycin" (rapamycin being an important immune suppressant drug) - in T and B cell differentiation and are dissecting molecular mechanisms involved in these findings as well as impact on immunity, including T cell memory, B cell development and function in models of vaccination and anti-pathogen immunity, and in autoimmunity.

An earlier focus of the research has been on the differentiation of naive T helper lymphocytes into activated cells that have acquired effector functions, i.e., the ability to express new genes that orchestrate immune responses. One subset of effector T helper cells is called the Th2 subset. Differentiation into Th2 effectors is driven by the cytokine IL-4, so one major area of study in the lab is the transduction of signals by the IL-4 receptor and the means by which IL-4 regulates gene transcription. We cloned and knocked out a gene encoding a novel protein that enhances IL-4 induction of transcription and pro-survival signaling. Future studies will include determining the biochemical and functional roles of this novel transcriptional coregulator.

We recently discovered that memory Th2 cells permit unexpected flexibility in the regulation of the Th1 cytokine gene for IFN-gamma while at the same time retaining commitment to expression of the characteristic Th2 cytokine genes (IL-4, IL-5, and IL-13). We will dissect molecular mechanisms for both flexibility and commitment, using analyses of transcription factor knockouts as well as of chromatin (epigenetic DNA methylation as well as histone modifications).

A second class of effector T cells is known as the Th1 subset, of which a hallmark is the activation of the gene encoding the inflammatory cytokine interferon-gamma. We discovered that the transcription factor NF-kappaB is particularly important in the Th1 response but not in responses mediated by Th2 cells, and have identified an orderly sequence of molecular events leading to remodeling of the IFN-gamma promoter. Using analyses of chromatin modifications and structure in the interferon-gamma locus, we are in the process of determining the mechanisms by which the gene is regulated in primary T helper subsets, memory CD4 cells, and exploring the impact of these processes on differentiation of another autoimmunity-promoting class of T cells (Th17 cells).