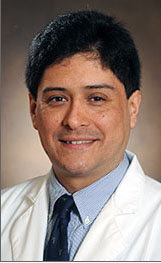 Before entering to the Medical Physics career, Dr. Morales held a tenured faculty appointment at the Pontifical Catholic University of Lima-Peru in the Electrical Engineering and Physics Schools becoming a Tenured Associate Professor in 2004, holding teaching, research, and leadership responsibilities. Dr. Morales has taught physics, engineering, and medical physics courses to more than one thousand undergraduate and graduate students as well as other professionals for more than 25 years. He has directed more than 10 theses at B.Sc., M.Sc. and Ph.D. level in physics and engineering. Dr. Morales also has collaborated as a columnist in the Peruvian newspaper Expreso publishing opinion articles (1999-2001).

Dr. Morales has been honored with the 2015-2016 Association of Residents in Radiation Oncology (ARRO) Educator of the Year Award, the World Laboratory Scholarship from Switzerland (2004), the Fulbright Scholarship (1995), and the CONCYTEC National Prize to the Technological Innovation (1994).