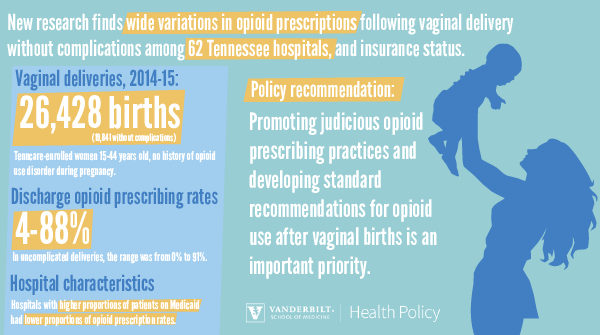 New research being presented in Dallas, Texas, at the Society for Maternal-Fetal Medicine Annual Meeting shows wide variation among Tennessee hospitals in whether or not new mothers are prescribed opioids at discharge.

The study by current and former Vanderbilt University Medical Center (VUMC) investigators finds that among 62 hospitals across the state, the opioid prescribing rates ranged from 4% to 88% for all births by new moms on TennCare (Tennessee's Medicaid program) between 2014 and 2015. The range was similar – from 0% to 91% — when complicated births were removed from the research sample.

“These ranges were quite surprising to us,” said the study’s lead author Jea Young Min, PharmD, PhD, a research associate at Weill Cornell Medical College in New York. “Even after excluding complicated deliveries, opioid prescribing practices appeared to vary widely across hospitals.”

The study included 26,428 vaginal births at 62 hospitals in Tennessee by women who were age 15-44 at the time of delivery. All of the new mothers were enrolled in TennCare, and none had evidence of opioid use disorder in the six months prior to delivery.

The study found that women who gave birth at hospitals where a greater proportion of moms had private health insurance were more likely to be prescribed opioids at discharge, even if their deliveries were uncomplicated. Conversely, at hospitals where more moms were only covered by TennCare, there was a lower rate of opioid prescription at discharge.