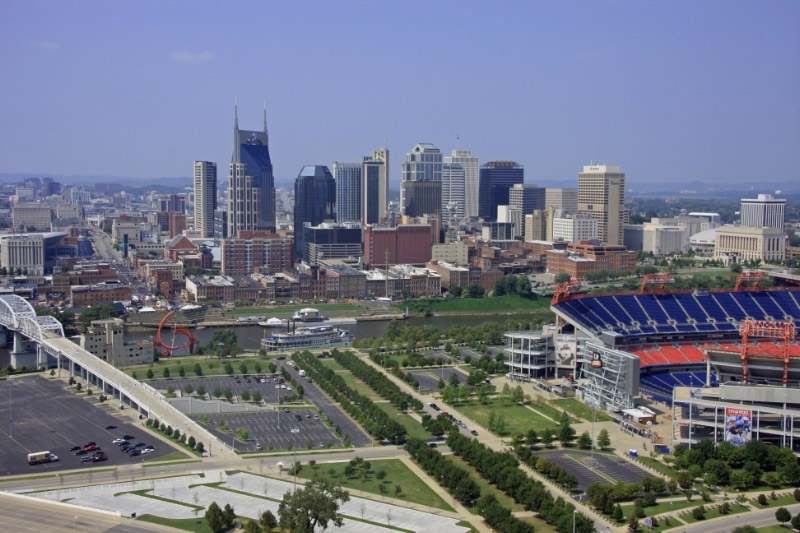 Nashville is the state capitol of Tennessee and the largest metropolitan area in the state.  Sustaining significant growth in the last decade, Nashville itself has a population of over 680,000 in Davidson County with the larger metropolitan are having a population of over 1.6 million.  The metropolitan area is home to a diverse population, including a significant number of South/Central American, Southeast Asian, East African and Middle Eastern immigrants.  Nashville’s largest industry is healthcare, and it is home to over 300 healthcare companies.  Vanderbilt University is the largest employer in Nashville.

The music industry plays a large role in the city’s economy and cultural identity.  While country music naturally takes center stage, Nashville attracts a variety of artists from every genre.   Nashville is second only to New York City in music production, giving Nashville the nickname “Music City, USA.”  Higher education is another cornerstone of Nashville’s identity.  The city is referred to as “The Athens of the South” and is home to seventeen colleges and universities, a replica of the Parthenon, and a statue of Athena, the goddess of wisdom, herself.

The arts are alive and well in Nashville.  The city is home to a Grammy-winning symphony orchestra that performs in the Schermerhorn Symphony Center.  The Tennessee Performing Arts Center is the home stage for the Nashville Ballet, Nashville Opera, Nashville Repertory Theater, and touring national productions.  Of course the city is home to some of the best places in the country to hear live music such as the Ryman Auditorium, the Grand Ole Opry House, the Bridgestone Arena, and Ascend Amphitheater.  The Frist Center and Cheekwood Botanical Garden and Museum of Art host fantastic visual art exhibitions.

Sports fans can delight in nearly year-round opportunities to cheer for Nashville’s teams.  The NFL Tennessee Titans, NHL Nashville Predators, MLS Nashville SC and the AAA Nashville Sounds all call the city home.  Vanderbilt University is a member of the Southeastern Conference and hosts some of the most exciting college teams in baseball, football, tennis and many other sports.  For outdoor lovers, Nashville has 43 scenic parks and playgrounds that are only minutes away.  The Warner Park complex alone comprises over 2,500 acres of fields, forests, and trails.  Radnor Lake is a sanctuary in the city, and Percy Priest lake is a favorite for boating, swimming, and fishing.  Tennessee’s State Park system is comprised of 56 unique parks with trails, waterfalls, cabins, and campgrounds.  The state is home to 12 National Parks, including the beautiful Great Smoky Mountain National Park.

Nashville is a city that loves to celebrate.  Take in one of the city’s favorite festivals such as the Tomato Art Festival, Live on the Green, the Nashville Film Festival, CMA Music Festival, Tin Pan South Songwriters Festival, Americana Music Fest, Nashville Shakespeare Festival, or Hot Chicken Festival.  Nashville truly has something for everyone.