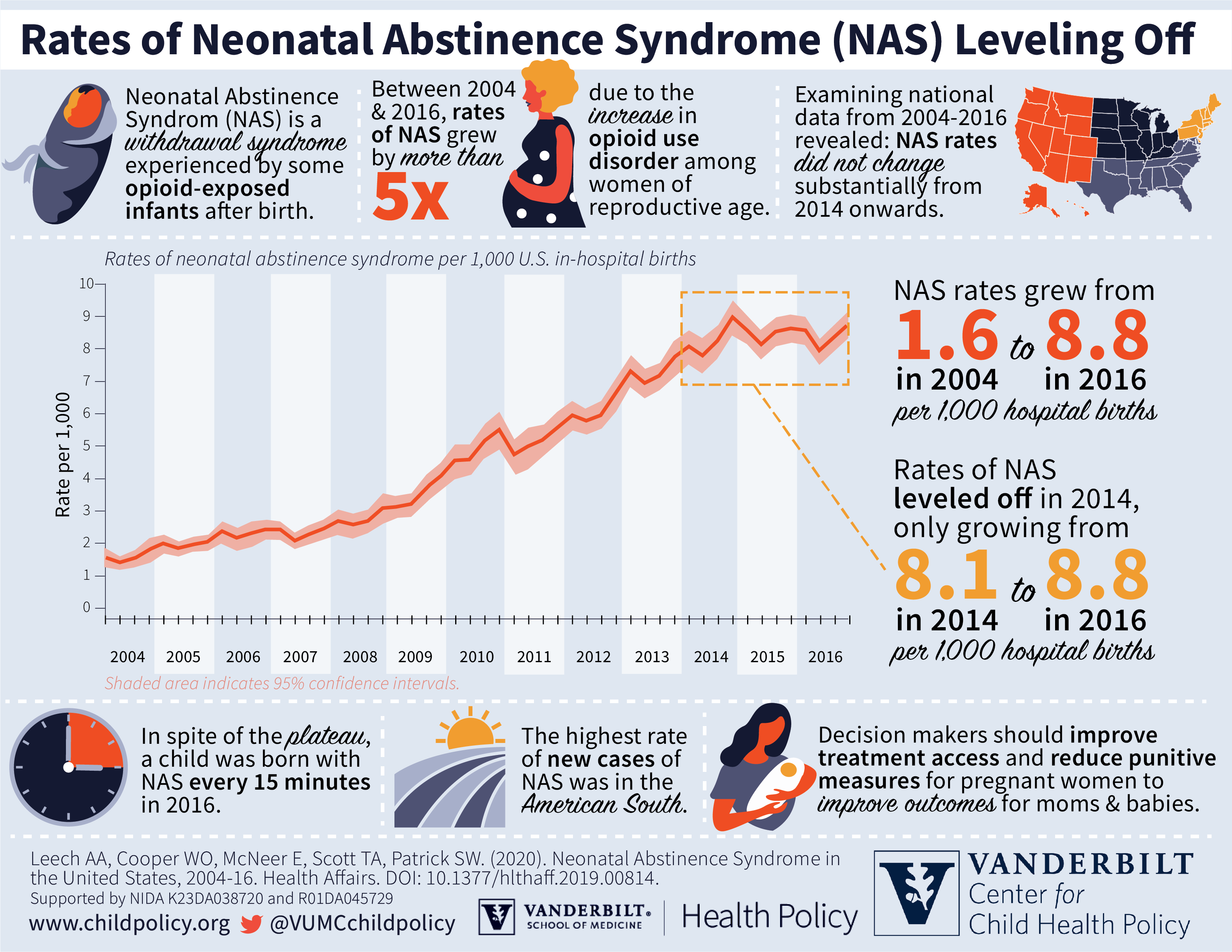 May 4, 2020 — Rates of neonatal abstinence syndrome (NAS) have plateaued after 20 years of increasing frequency across the country, according to a new study published in Health Affairs. NAS is a withdrawal syndrome experienced by some opioid-exposed newborns after birth.

The National Institutes of Health-funded study led by Ashley Leech, PhD, assistant professor of Health Policy at Vanderbilt University Medical Center (VUMC), finds that rates of NAS per 1,000 live births stabilized in 2016 after peaking in 2014 at the beginning of a surge in opioid-related deaths in the United States.

“Evidence is beginning to show that we’re holding down the rising trend in NAS,” Leech said. “While encouraging, rates are significantly higher than they were 20 years ago; we still have more work to do.”

“In 2016, one baby was born every 15 minutes with NAS,” said Leech. “Rates may have plateaued, but are still high, and there is a need for continued action to improve outcomes for pregnant women and infants affected by the opioid crisis.”

Geographically, the study found the lowest overall rates of NAS in the West and the highest overall rates in the Northeast. These results were consistent with previous research. The study uses the most recent data on NAS available.

Several federal policies have sought to address the effect of the opioid crisis on mothers and infants, including legislation in 2015, 2016 and the Substance Use-Disorder Prevention That Promotes Recovery and Treatment (SUPPORT) for Patients and Communities Act of 2018.

“Recent federal policy changes like the SUPPORT Act were steps towards supporting moms and babies affected by the opioid crisis,” said Stephen Patrick, MD, MPH, Director of the Vanderbilt Center for Child Health Policy and senior author of the study. “What’s critical is for decision makers hoping to reduce the effect of the opioid crisis on pregnant women and infants to continue to promote evidence-based policies that improve treatment access and reduce punitive measures. We know these steps improve outcomes for both mom and baby.”