Research Into Policy & Practice Lecture Series - Medicare For All

(Shared from an article originally published by the VUMC Reporter.)

The concept of a single-payer, government-run health care program — Medicare for All — has sparked national debate, and that proposal was the focus of a spirited discussion on Nov. 19 at the Research into Policy and Practice Lecture sponsored by the Department of Health Policy at Vanderbilt University Medical Center.

Chip Kahn, president and CEO of the Federation of American Hospitals, and Carol Paris, MD, immediate past president of Physicians for a National Health Program, shared the stage with moderator Dan Gorenstein, former national health correspondent for American Public Media’s “Marketplace” program and co-host of a new podcast called “Tradeoffs,” which centers on health policy.

Supporters of Medicare for All argue that it’s the best way to provide health care for all Americans while also holding down costs. Critics counter that the expense would be astronomical, question how to fund it and doubt the federal government could effectively manage such a massive program.

“The topic of Medicare for All is one that has come to the forefront of the Democratic primary in the debates we’ve seen so far, but it’s one that’s been discussed for decades if not generations,” said Melinda Buntin, PhD, Mike Curb Professor of Health Policy and chair of the Department of Health Policy. “And yet it is a proposal about which most Americans actually have a lot of misunderstandings.”

Buntin cited a recent Kaiser Family Foundation survey that showed 55% of Americans thought they would be able to keep their insurance through an employer under a Medicare for All Plan, which isn’t true under most proposals. In the same survey, more than half of individuals who bought their own health insurance incorrectly believed they could keep it, and 69% of people thought they would still have copayments and deductibles under Medicare for All, which is inaccurate.

Both Kahn and Paris discussed different scenarios — establishing a Medicare For All system and fully implementing the Affordable Care Act — and the prospects of each in a sharply partisan national political climate.

Paris said navigating health care would be simpler for individuals under a Medicare for All system, without insurance plan changes from year to year, the need to keep track of in-network providers and the threat of financial hardship if faced with a catastrophic health event. She also argued that administrative burden for hospitals would also be greatly reduced.

“We spend twice as much for health care as other developed countries because our health care system has become the most profitable and administratively complex industry in the United States,” Paris said. “And every dollar we save enacting a Medicare for All plan is coming out of these industries’ income. And these powerful, vested interests have launched another multimillion-dollar messaging campaign — a campaign of fear, uncertainty and doubt — and its goal is to stop Medicare for All dead in its tracks.”

Kahn said in states where the Affordable Care Act (ACA) was fully implemented, such as California, Massachusetts and Minnesota, there is evidence that universal coverage can work. But poor initial implementation of the ACA, the dismantling of portions of the program, and an inability to reach bipartisan solutions to some elements indicate that obstacles to Medicare for All might prove insurmountable.

“It’s great to talk about a big change and making sure everyone’s covered and no deductibles, but frankly, that assumes that we’d be able to make some great leaps both politically and economically, which are unlikely,” he said.

When the panel took questions from the packed lecture hall, they were asked how Medicare for All would change health care delivery.

“I can tell you, having worked in Congress for years, (the government is) going to pay Medicare or Medicare minus (level of reimbursement), and it’s going to be very difficult to have the hospital that you have today, even under those circumstances,” Kahn said.

“That’s why the financing side and the delivery side intersect when it comes to payment. And we’re talking about a situation where if you put all the expenditures for health care on the federal budget, and you can only raise the taxes so much, there’s going to be a lot of stress.”

Paris took an opposing view, arguing that rural hospitals that are struggling financially would rally because they would be receiving payment for all patients rather than covering the balance for a disproportionate number of uninsured or underinsured individuals. 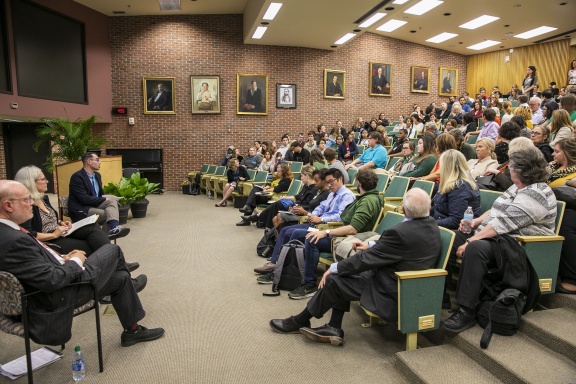