A new Vanderbilt-designed prediction model may make it easier to determine which infants will go on to develop neonatal abstinence syndrome (NAS), a drug withdrawal syndrome in newborns that occurs after exposure to opioids during pregnancy.

According to recommendations from the American Academy of Pediatrics (AAP), most newborns exposed to opioids are kept in the hospital for four to seven days to be monitored for development of NAS and sometimes away from their mothers, as opposed to one to three days for infants who have not been exposed. 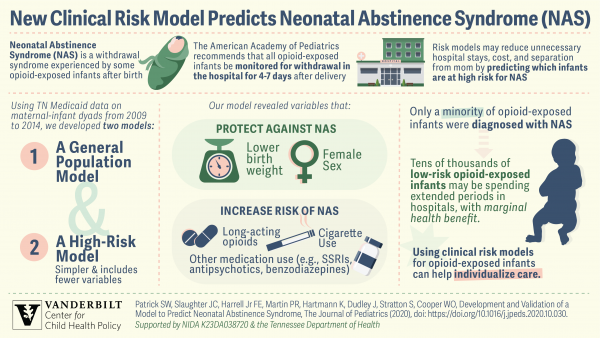 It’s a one-size-fits-all treatment approach that can result in excessive hospital stays and cost with little benefit (if withdrawal doesn’t occur) and an interruption in bonding between mothers and their newborns. The inability to identify infants at high risk of NAS at the time of birth may also result in delays in treatment.

“Our research group has found that opioid use in pregnancy and NAS has grown substantially over the past two decades,” said Stephen Patrick, MD, MPH, MS, a neonatologist at Monroe Carell Jr. Children’s Hospital at Vanderbilt and associate professor of Pediatrics and Health Policy.

Patrick, director of the Vanderbilt Center for Child Health Policy and lead author of the Pediatrics study of the new prediction model, said the number of mothers diagnosed with opioid use disorder grew fourfold and the rate of newborns being diagnosed with NAS grew nearly sevenfold over the last two decades. By 2016, one infant was diagnosed with the syndrome every 15 minutes on average nationwide, resulting in more than $500 million in hospital costs.

Until now there have been no accurate clinical tools to guide management of opioid-exposed infants after they are born.

“But we need to guide some of the initial steps that we do for infants — how we observe them, based upon their risk, as opposed to treating all infants the same,” Patrick said.

“Although the AAP recommends that infants exposed to opioids be observed in the hospital for four to seven days after they’re born, we wondered if it might be possible to discharge infants to home earlier with the right support.”

The tool, which will be tested further before it’s widely implemented, provides the ability to understand what percentage of infants exposed to opioids go on to develop withdrawal.

“We estimate that around 100,000 opioid-exposed infants are born each year and many are observed excessively,” Patrick said.

William Cooper, MD, Cornelius Vanderbilt Chair in Pediatrics and senior author on the study, added, “Immediately after birth, we often find it difficult to identify which infants with opioid exposure are safe to be discharged. Having a tool like this will help us determine the best type of care to provide in these situations.”

The investigators developed two predictive models for NAS — one, a simple “general population” model, and the other, for use with a subset of subjects with Hepatitis C virus infection or opioid exposure in the last 30 days (the higher-risk model).

Although opioid-exposed infants are normally not taken care of in the Neonatal Intensive Care Unit (NICU) at Children’s Hospital, they are routinely treated in the NICU in other hospitals, Patrick said.

Being able to sift out the infants who are not likely to develop NAS would prevent them from having to be kept in the NICU in these other hospitals, Patrick said.

Opioid use among pregnant women is very different among patients — some women may be in long-term recovery for opioid use disorder, taking medication to improve pregnancy outcomes. These are the women who have infants who could potentially be discharged earlier. “It would be really beneficial,” Patrick said.

While the Vanderbilt investigators continue to test the model, an interactive web tool is available on the Center for Child Health Policy’s website, www.childpolicy.org/NASrisk.