What is an fMRI? 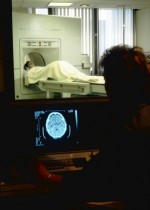 Functional MRI or functional Magnetic Resonance Imaging (fMRI) is a type of specialized MRI scan and one of the most r ecently developed forms of brain imaging. It is based on the same technology as the MRI -- a noninvasive test that uses a strong magnetic field and radio waves to create detailed images of the body. Instead of creating images of organs and tissues like MRI, an fMRI looks at blood flow in the brain to detect areas of activity. These changes in blood flow, which are captured on a computer and shown on the screen, help doctors and researchers understand more about how the brain works.

This neuroimaging technique allows us to detect the specific areas of the brain which are involved in a task, a process, or an emotion. Color changes on the fMRI scans show researchers what specific parts of the brain are being activated while the person in the scanner responds to images, sounds, or performs various tasks. This ability to see not only the structure of the brain, but the function of the brain is a major scientific advancement in medicine. 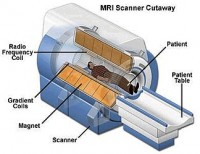 During the testing, you will lie on a table. Your head may be placed in a brace to hold it still. Then you are moved into the large, cylindrical MRI machine. You may be given earplugs to reduce the sound, since the scanner can tend to be noisy.

While the machine is scanning your brain, you will be asked to perform a variety of tasks. While remaining still in the scanner, you will use your fingers to give answers on a keyboard. You can expect to be in the scanner for about one hour.

Developed in the early 1990s, fMRI has come to dominate the brain mapping field due to its non-invasiveness, absence of radiation exposure, and relatively wide availability.

Although an fMRI test doesn't use radiation, its strong magnetic field and radio waves may not be recommended for certain groups of people including: people with certain types of metal in their bodies (pins, screws, plates or surgical staples for example), people who are particularly claustrophobic, have cochlear implants, pacemakers, or are pregnant. You will be asked to give specific information about these and other possible exclusions prior to being placed in the scanner. All metallic objects (jewelry, pens, etc.) must be removed before entering the MRI suite.

AHEAD 3-45 - Think AHEAD of Alzheimer’s Disease

Why should you consider a clinical trial?