Vanderbilt Department of Biostatistics Takes on the Nashville Sounds

You know it's the middle of summer in Tennessee when you step outside for five minutes and then realize you already feel like going back inside and taking another shower. At that rate,  why not stay outside, settle in and spend a few hours supporting your local team and taking in the great game of baseball?

That's exactly what several members of the Vanderbilt Department of Biostatistics did recently, as the Nashville Sounds took on the Round Rock Express, at the First Tennessee Park near the State's capitol on Sunday, June 24th.  The Department hosted an outing to gather faculty, staff, students and their loved ones to help commemorate another year of growth and success in the Department.

It was the perfect Southern night to spend outside, sipping on sweet tea, watching the sun fade over the stadium, and taking advantage of a full buffet of ballpark favorites: burgers, slaw, chips and cookies!  As we gathered together, it was perfectly evident that this simple outing brought people together.  Sometimes we can get so caught up in the day to day hustle and bustle, and just stepping outside the walls of Vanderbilt, enjoying the time to get to see another side of our colleagues, brings a renewed sense of camaraderie among the group.

There's a certain level of hometown pride that sets in as you watch Nashville's Minor League team play in the heat of summer, even though many of us moved here from somewhere else;  some from across the country and some from across the world.  One thing that remains true is that no matter where you came from, we all have a place to belong here in the Vanderbilt Department of Biostatistics.

Thanks to everyone who was able to make it out to the Nashville Sounds game!  We'll look forward to seeing everyone at the next outing! 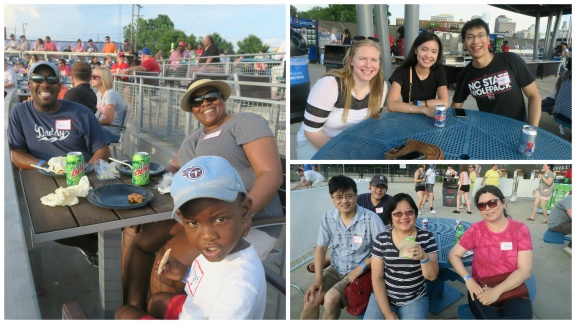