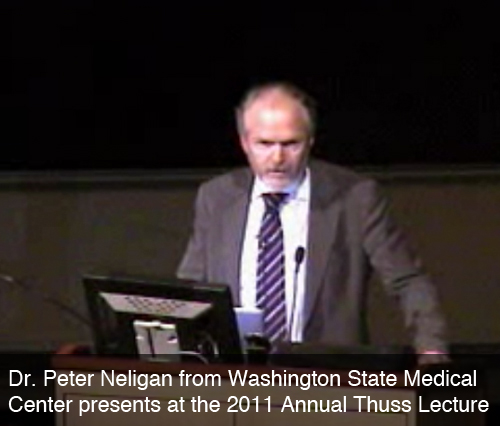 The Thuss Lecture is made possible through the generosity of Dr. Charles J. Thuss, Jr., and Mrs. Charles J. Thuss. Dr. Thuss was a graduate of Vanderbilt Medical School's class of 1961 and was a distinguished pathologist of San Antonio, Texas. The lectureship was established in 1977 for the purpose of bringing distinguished lecturers in the field of Plastic and Reconstructive Surgery to the Vanderbilt campus for teaching.

The lecture also honors Charles J. Thuss, Jr., and his son, Carter, who died in a tragic plane crash on Thanksgiving Day, 1983. Charles was born in Birmingham, Ala., educated at McCallie School in Chattanooga, Catholic University and Vanderbilt University School of Medicine. He trained in Pathology at Brooke Army Hospital and Baylor Hospital in Texas. He served with distinction as a pathologist and commanding officer of the 946th Medical Laboratory in Vietnam, as well as Chief, Anatomical Pathology and commanding officer of the Fourth Army Area Laboratory at Ft. Sam Houston. He followed his army career with a successful private practice, which has led to the development of rural health initiative programs, on-site laboratories for rural hospitals, and a new nationwide cost-effective cytology screening procedure. He organized plastic surgery lectureships at Vanderbilt and also Stanford University.

Listed are the most renowned plastic surgeons who presented at Plastic Surgery's Thuss Lecture from 1978 to today.