Department of Ophthalmology and Visual Sciences

Our lab studies the contribution of inflammatory mediators in neovascular age-related macular degeneration (AMD). AMD is a degenerative condition of the macula (the central retina) and is the most common cause of vision loss in individuals 50 or older. Neovascular or “wet” AMD occurs when new blood vessels invade the macula leading to photoreceptor death. Inflammatory mediators, such as prostaglandins, are thought to be involved in this process. Our lab has already shown that inhibition of cyclooxygenase (COX) and thereby prostaglandins with nonsteroidal anti-inflammatory drugs (NSAIDs) can inhibit neovascularization in an animal model of AMD. Further downstream inhibition of specific prostaglandin subtypes or their receptors should enable more targeted therapeutic strategies. The laboratory uses cellular and molecular approaches to investigate the role of inflammatory mediators in neovascularization and relies on animal models of AMD to measure therapeutic effects. 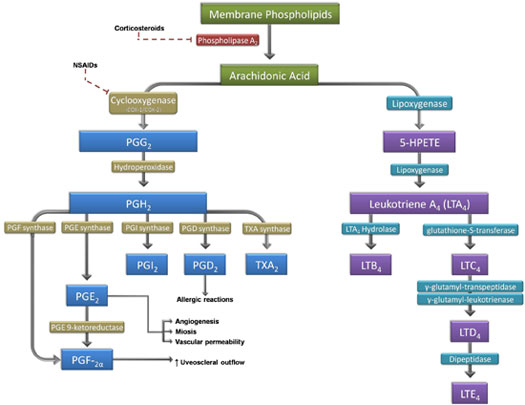 Inflammatory pathway: NSAIDs are more specific than corticosteroids in inhibiting prostaglandins through their inhibitory effect on cyclooxygenase.

Inhibitory effect of ketorolac on choroidal neovascularization. We have previously established that NSAIDs are safe when injected into the eye and significantly inhibit ocular inflammation in an animal model of uveitis. We are currently utilizing an animal model of AMD to study the efficacy of intravitreal injection of NSAIDs (ketorolac) on choroidal neovascularization (CNV) development and progression. 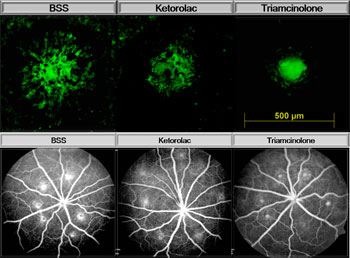 Choroidal tissue mounts and fluorescein angiograms demonstrating inhibition of CNV with ketorolac in a rat model of AMD with respect to saline (BSS). Ketorolac’s inhibitory effect was less than that of corticosteroid (triamcinolone).

Relationship of prostaglandins and VEGF in AMD