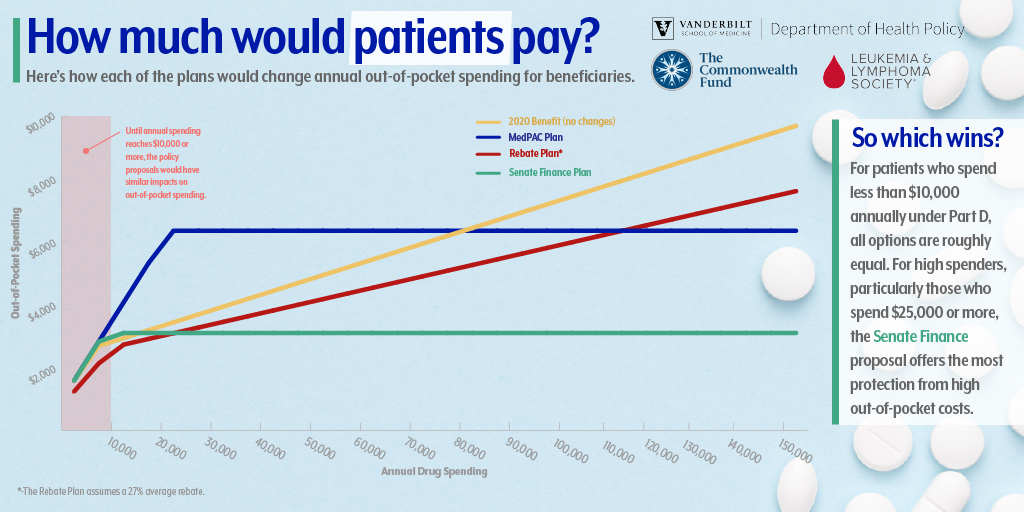 Efforts to redesign Medicare Part D have become central in the larger effort to control the rising price of prescription drugs in the United States, but three policy proposals under consideration by Congress would produce different results, according to a new perspective published by Stacie Dusetzina, PhD, associate professor of Health Policy and Ingram associate professor of Cancer Research at Vanderbilt University Medical Center (VUMCP, and co-authors Nancy Keating, MD, MPH, and Haiden Huskamp, PhD, of Harvard Medical School.

The perspective, published this month in the New England Journal of Medicine, illustrates how each proposal would shift costs shared by insurers, drug companies, the government and Medicare beneficiaries. The perspective also shows how prices for beneficiaries vary across the three redesign options, especially for beneficiaries with very high levels of drug spending. The piece notes that none of the proposals take direct aim at the rising price of prescription drugs.

The proposals have been developed as recent research, including that of Dusetzina, has demonstrated the growing costs for patients and insurers of specialty medications for conditions like cancer and rheumatoid arthritis.

The proposals include the rebates rule from the Department of Health and Human Services, a Part D redesign plan from the Medicare Payment Advisory Commission known as MedPAC, and a bipartisan proposal released by the U.S. Senate Finance Committee.

Under the rebates proposal, the current Part D benefit design is maintained but rebates typically kept by insurers are banned. Rebates would only be allowed if they are used to lower a patient’s drug costs at the pharmacy counter.

Under the MedPAC proposal, the benefit would include a $6,350 out-of-pocket maximum. It would also exclude the value of the 70% manufacturer discount currently counted toward out-of-pocket spending in the coverage gap, also known as the “donut hole.” The proposal would also reduce Medicare’s share of spending to 20% and increase insurer spending to 80% in the catastrophic coverage phase.

Under the Senate Finance Committee’s proposal, beneficiaries would pay a deductible and 25% coinsurance up to a $3,100 maximum. This plan would reduce out-of-pocket spending for beneficiaries, reduce Medicare’s share of spending to 20%, and increase the share paid by insurers to 60%. Branded drug manufacturers would no longer pay the 70% coverage gap discount; instead they would pay 20% of drug spending after the beneficiary reaches the out-of-pocket maximum.

For all of these proposals there is a risk that Part D premiums will rise to account for higher spending by plans, and policymakers will need to carefully weigh those tradeoffs.

“Proposals that limit out-of-pocket spending for beneficiaries needing expensive drugs by shifting spending from beneficiaries to plans will require trade-offs in the form of premium increases or reduced generosity in other parts of the benefit,” Dusetzina stated in the perspective.

The bottom line is the Part D program does not currently provide enough financial protection for beneficiaries who need high-priced drugs. The authors suggest that an out-of-pocket cap is needed as well as strategies to address the high prices of prescription drugs. Of the proposals evaluated, only the Senate Finance bill and the MedPAC proposal include out-of-pocket caps.

The Senate Finance Committee plans to release the text of the drug pricing bill in September.

“If the Senate Finance bill moves forward in Congress, this could result in improved medication access for patients needing high-priced drugs,” said Dusetzina. “Looking ahead, we hope that Congress will build on these efforts to address drug prices more directly to make sure the program is sustainable into the future.”

The research was supported by The Commonwealth Fund and the Leukemia & Lymphoma Society.