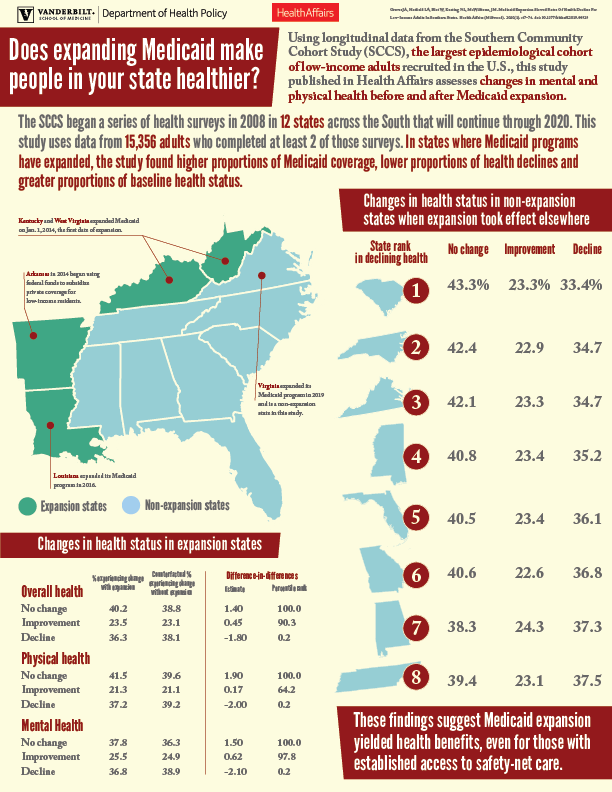 In Southern states that expanded their Medicaid programs under the Affordable Care Act, adults experienced lower rates of decline in both physical and mental health, according to research published this month in the journal Health Affairs.

This new research conducted by faculty at the Department of Health Policy at Vanderbilt University School of Medicine (VUSM) and Harvard Medical School draws on data on 15,536 low-income individuals recruited predominantly at community health centers in 12 Southern states as part of the Southern Community Cohort Study. Its findings add substance to state-level debates over the merits of expansion, including the question of whether access to safety net programs can serve as an adequate substitute for health insurance coverage.

“Our study is the first to consider the pathways through which, and populations for whom, expanded access to Medicaid affects the health trajectory of low-income adults,” said lead author John Graves, PhD, associate professor of Health Policy at VUSM. “It fills an important gap between research that has found little evidence of health effects and other research demonstrating that expanded Medicaid saved lives.”

Previous research has found modest changes in self-reported health and reductions in mortality associated with Medicaid expansion, but a review of 77 studies published in 2018 in Health Affairs found that 60% of assessments of health status did not find evidence of beneficial impacts from the ACA’s expansion. This muddled evidence has fueled the debate over whether accepting expansion funds could improve population health.

“The effect is sizable and would amount to the worst-ranked Southern state rising about halfway up the rankings in state population health if it expanded Medicaid,” said McWilliams, senior author and Harvard Medical School Professor of Health Care Policy. “Unlike many other studies, we were able to focus on some of the most vulnerable populations who stand to gain the most from insurance coverage.”

Of the 14 states that have not yet expanded Medicaid, nine are in the South and two border the region.