The fall semester has begun, and these ten brilliant, engaging individuals are the newest students in our graduate program. Here are a few details about their studies, careers, and interests. We are very much looking forward to learning and working with them!

After graduating from Colby, Nate worked as a data analyst intern at GlaxoSmithKline, where he developed statistical models for analyzing consumer healthcare data. Some of his interests outside of the classroom include tennis, fantasy sports, traveling, and cooking.

Yeji (rhymes with "veggie") grew up in Seoul, Korea. In Ann Arbor, she became interested in biostatistics and learned how to survive in cold weather. In her spare time, she loves traveling, exploring new places, and having great conversations over delicious meals.

Joshua is originally from Tampa, Florida. His path to biostatistics began in 2016 when he joined an expert witness group quantifying healthcare fraud at the US Department of Justice (DOJ). He worked on matters ranging from over-prescribing to unnecessary hospice services. For such cases, he designed statistical samples and analyzes/merges claims data, electronic health records (EHRs), and internal company sources. Joshua is eager to transition from retrospectively analyzing the worst of healthcare to building predictive models to improve human health.

Jared is originally from Minnesota. After graduating from Wisconsin, Jared spent a few years studying adherens junctions in C. elegans and then joined the lab management team at Exact Sciences, where he became deeply interested in the statistical methods that led to the development of Cologuard and other cancer screening technologies. His main interest is in statistical genetics, with an emphasis on biomarker discovery. Outside of work, he enjoys playing volleyball, board games, and hiking with my dog, Cooper.

During college, Megan worked for the Kentucky Violent Death Reporting System as a data abstractor, constructing case narratives for homicides, suicides, and undetermined deaths. She is passionate about data-driven public health improvements and mental health, which she would love to incorporate into her work. In her personal life, she is an avid board game fan, reader, and geocacher.

Julia's career in public health research started at Imperial College London, where she focused on chronic disease and cancer epidemiology. During her studies, she also edited regional HIV prevention proposals in Eastern Europe and the Balkans for the United Nations Development Program. She has since worked an intern at the Fred Hutchinson Cancer Center, clinical trials coordinator in the gastrointestinal oncology department at the University of California, San Francisco (UCSF), and data manager and clinical research analyst for UCSF’s Center for Neuroendocrine Tumors, where she enjoyed collaborating with an interdisciplinary team to answer questions in areas ranging from genomic medicine and survival analysis to in-clinic quality improvement.

Lucy most recently worked as a research assistant in the Department of Chemistry at Vanderbilt University, focusing on data-driven methodologies for biomolecular discovery. Before coming to Nashville, she worked in industry as a data analyst for two years, where she developed competency in both statistical research and real-world applications. Knowing the huge potential of statistical solutions in biomedicine and biological research, she's enthusiastic about embarking on an academic path toward solving open challenges in human health and diseases treatments.

While studying data science, Lydia developed an interest in statistical methods and modeling within health and medicine. She grew up in Indiana and enjoys playing piano, guitar, and clarinet. Competitive swimming has been a big part of her life, and she still occasionally swims for exercise. She enjoys solving sudoku puzzles and cooking different cuisines.

Elisa is originally from North Carolina. Over the course of three internships - one at Vanderbilt and two at Duke - she worked on a variety of projects, studying neurodevelopment in animals, cognitive diseases, electrophysiology, and the impacts of drugs. “Paternal THC Exposure in Rats Causes Long-Lasting Neurobehavioral Effects in the Offspring,” a paper on one of her projects at Duke, was published in the Neurotoxicology & Teratology Journal. Her interests include pharmacokinetics, electrophysiology, cognitive disorders, and clinical trials. In her free time, she enjoys watching classic movies, sports, working out, and cooking. 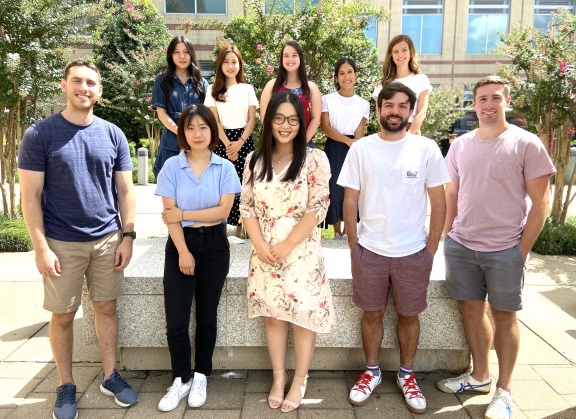 To view a larger version of this photo, click the "Graduate Program" link near the top of this page.
Tags
students
RSS: