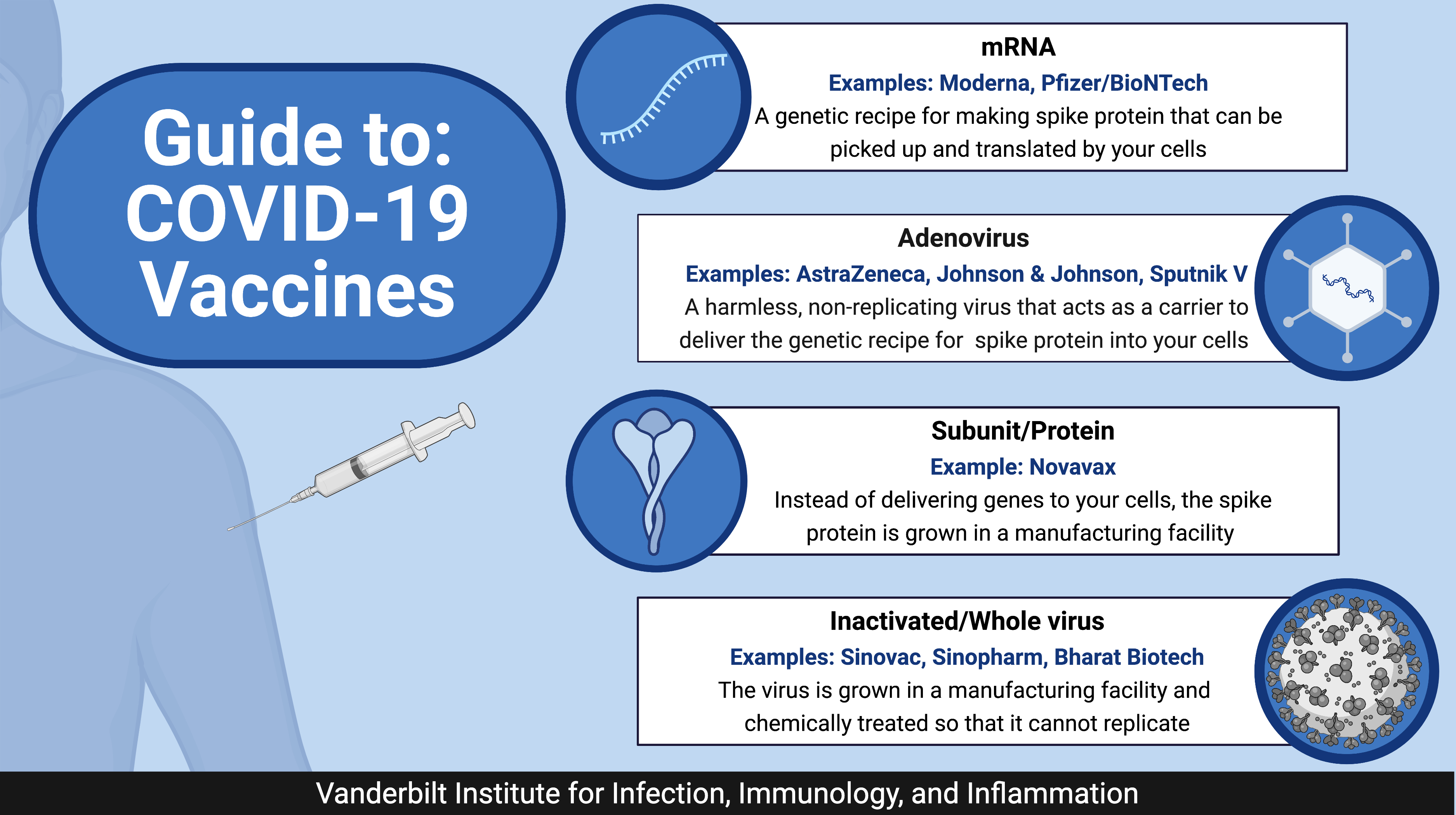 Viruses are remarkably simple for how much devastation they cause. SARS-CoV-2 is composed of a ball of protein and lipids (or fats) that contains genetic material (or RNA) inside. Different vaccine approaches either use parts of the virus (e.g., the genetic material or proteins) or the whole virus to generate an immune response to fight the infection.

So far, all of the vaccines approved in the United States use genetic approaches. Moderna and Pfizer/BioNTech's vaccines are mRNA-based. mRNA is a genetic recipe for making the SARS-CoV-2 spike protein. After injection, the cells in your arm can pick up the mRNA, translate it into protein, and display it on the cell's surface. Your immune system then responds to this foreign protein.

Johnson & Johnson’s vaccine also employs a genetic approach but uses an adenovirus carrier to deliver the spike protein's genetic recipe into your cells. As the virus replicates inside a cell, it also produces the SARS-CoV-2 spike protein to generate an immune response. There are over 75 different adenoviruses that infect humans, all of which are relatively harmless and produce mild cold-like symptoms. Likely, you've already been infected with at least one adenovirus. The adenoviruses used are designed to be replication incompetent – meaning they can only infect one cell and cannot continue to propagate throughout the body. AstraZeneca/Oxford's vaccine also employs an adenovirus vector that typically only infects chimpanzees, further diminishing safety concerns.

Advantages: Genetic approaches are easily adaptable to different viruses. Since your cells are making the protein, it is more likely that the spike protein is in its natural state and will generate a better immune response. This approach also more closely simulates a natural SARS-CoV-2 infection in which the virus hijacks your cells to produce the protein — again creating a better, complete immune response. Adenoviruses replicate efficiently, making them relatively inexpensive to produce and easy to manufacture.

Disadvantages: mRNA rapidly degrades at room temperature and requires special storage conditions (although adenoviruses are much more stable and can be kept at normal refrigeration temperature). Since there are so many adenoviruses circulating, many people have already been infected and have immune memory to adenoviruses. Thus, your immune system may rapidly clear the adenovirus carrier from your system before it can infect your cells and generate an effective immune response.

Instead of using your cells to produce the spike protein, it can also be made directly in a manufacturing facility. Protein-based approaches are also called subunit vaccines because you are only using a part of the virus. A U.S.-based company, Novavax, uses this approach and is in phase 3 clinical trials. Novavax's platform produces the spike protein in cell culture and then conjugates it to a nanoparticle to stabilize it and imitates how it is displayed on the virus.

Advantages: Subunit-based vaccines do not have any live components and are a very well-established vaccination method. Proteins are also relatively stable at room temperature or normal refrigeration conditions.

Disadvantages: Manufacturing depends on the type of protein--some of which are much more difficult to produce. Thus, it is also a less adaptable platform. Since you are artificially growing it in a laboratory, sometimes it may not look identical to the spike protein produced by your cells. If the protein has critical differences, it can generate an ineffective immune response. Proteins alone are usually not enough to alert the immune system. Other components, called adjuvants, are necessary to signal immune cells, further complicating manufacturing and safety trials.

Advantages: You can generate an immune response to other parts of the virus other than the spike protein. It does not require modifications, as long as the virus can be grown in the laboratory with relative efficiency.

Disadvantages: If the virus is not inactivated correctly/contaminant remains in the preparation, it can pose safety concerns. Chemical inactivation can also affect the areas of the virus that the immune system recognizes — creating a less optimal immune response that does not look like the actual virus. SARS-CoV-2 is also a higher biosafety level, making it challenging to produce the virus at high volumes safely.

The most effective pandemic responses employ multiple vaccination strategies to stem the spread of the virus. Although each vaccine has its strengths and weaknesses, all approaches effectively train our immune response to fight SARS-CoV-2 infection and prevent severe COVID-19 symptoms.