Even though is landlocked, the Tennessee Poison Center (TPC) occasionally receives calls about envenomation's or poisonings from marine sources. 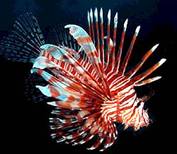 The TPC received a call from an outpatient site regarding a patient who had a sting from his lionfish.

Lionfish are a salt water fish that are commonly imported from the Philippines. Lionfish are in the 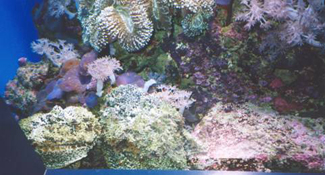 Scorpaenidae family of vertebrate fish. The scorpionfish are divided into three genera depending on the venom organ structure. The genera are Pterosis (lionfish, turkeyfish, etc), Scorpaena (scorpion fish, etc) and Synanceja (stonefish). Pterosis have long slender spines as noted in the picture above left. The venom gland is covered by a thin integumentary sheath. Scorpaena have heavier spines with a thick integumentary sheath. Stonefish (Synanceja) have short thick spines with well-developed venom glands.  Stonefish are very well camouflaged in their native environment as noted in the picture to the right where it is difficult to find the stonefish. Scorpaenidae are usually bottom dwellers and inhabit shallow waters around coral reefs and kelp beds in the warm waters of the South Pacific. 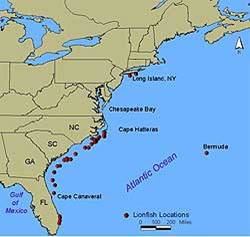 Symptoms from envenomation include severe and intense pain at the wound site with about half of the cases developing swelling. Systemic effects may include nausea, diaphoresis, difficulty breathing, hypotension, and syncope. The venom is poorly characterized, is heat labile, and is not dialyzable.  Recommendations for treatment include

Interestingly, there are sightings of Lionfish along the Southeastern coast of the (see map for locations in year 2003, map is from website of National Oceanic and Atmospheric Administration).  The source of the lionfish may be from the aquarium trade and less likely from the release of ballast water by ships. The impact of these non-native fish in this ecosystem is uncertain.