Thanksgiving is right around the corner -Pies, pumpkin desserts, and flavored lattes! Nutmeg is a commonly used spice that is derived from the dried seeds of the evergreen tree Myristica fragrans. Since medieval times, it has had many purposes including use as a stimulant, carminative (relieves flatulence), emmenagogue (induces menstruation), an abortifacient, and occasionally a recreational hallucinogen (often made popular by movies and TV). However, its primary use is as a spice in holiday dishes.

Myristicin and elemicin are the primary ingredients in ground nutmeg and thought to be responsible for the psychologic and physiologic effects observed. Myristicin is metabolized in the body to MMDA, a known sympathomimetic with hallucinogenic properties. It also can interact with serotonergic agents due to pharmacologic properties similar to monoamine oxidase inhibitors (MAOIs).

Symptoms of nutmeg intoxication typically appear 3 to 8 hours after ingestion and last from hours to days. The dose at which the psychogenic effects have been reported range from 15-20 grams (or two to three tablespoons of ground nutmeg). This amount is very unpalatable which may explain the infrequency of nutmeg abuse.

A retrospective study looking at nutmeg ingestions reported to a single poison center described  32 exposures between 2001 and 2011. The median age of exposure was 16 years old. Approximately 46.9% of exposures were intentional. Of the patients exposed, 31.3% were treated in a hospital. While the reported incidence of exposure is relatively low, the possibility of exposure due to holiday availability and media influence is much higher - especially in teenagers and young adults.

Never hesitate to call the Tennessee Poison Center with questions or concerns, 1-800-222-1222. A specialist in poison information is always ready and willing to help! 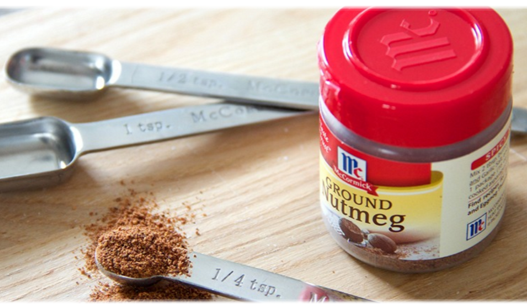 A can of McCormick’s Ground Nutmeg (net weight 1.1oz or 31 grams)

I am interested in any questions you would like answered in the Question of the Week.  Please email me with any suggestion at donna.seger@vumc.org.