April 28, 2003: Can one or two tablets be potentially fatal in children?

Dr. Hoover from Summit Medical Center has the following question:  Name 5 overdoses in children that are potentially fatal with just a one or two pill ingestion.

This question is best answered with referral to a table by Osterhoudt et al in the Textbook of Pediatric Emergency Medicine.1  The table is adapted from  an article by Osterhoudt in Contemporary Pediatrics.2  This table lists various medications that can be highly toxic to a 10 kg toddler in one or two doses.  It also lists the estimated minimum fatal dose and major toxicities of these drugs.  The most frequently occurring effects are seizures, CNS depression and arrhythmias.  Koren reported similar findings in 1993.3

However, it is also important to remember other medications not mentioned here that can be very toxic to a toddler.  Topical imidazolines are available over-the-counter in several eye and nose drops.  Examples include Afrin® (oxymetazoline) and Visine® (tetrahydrozoline).  These agents directly stimulate alpha-adrenergic receptors, which is similar to the mechanism of action of clonidine.  Toddler ingestions of even very small amounts (≤ 5 ml) of these OTC products can cause hypotension, shock, coma and bradycardia.4

Several other drugs are of concern in small doses.  Lidocaine is available in liquid (viscous), ointment, patch and solution dosage forms, and  ingestion of 5 ml of 2% viscous liquid can cause seizures..  Digoxin is available in elixir and tablet forms, and can cause arrhythmias; at doses ≥ 4 mg in children it can cause cardiac arrest.  Any antiarrhythmic has proarrhythmic properties in healthy subjects, and therefore caution is warranted with these medications as well.

Ingestion of opioids such as hydrocodone and fentanyl can be lethal in small children.  Tussionex® suspension has 10 mg of hydrocodone per 5 ml, and Duragesic® patches range from 25–100 mcg/hour (total of 2.5-10 mg/patch).  It is also worthy to note that fentanyl is available as a raspberry flavored lollipop with up to 1600 mcg per lozenge.  This would be very attractive to children who mistake it for a regular piece of candy.  Opioid overdose can result in CNS depression, respiratory depression, hypoxia, hypotension, and shock.

Nicotine can produce serious toxicity when consumed, especially in the patch form.  Effects of biting a patch and leaving it in the mouth for 60 seconds include hypertension, tachycardia, and vasoconstriction.

17 Drugs that can kill toddlers with 1 or 2 doses* 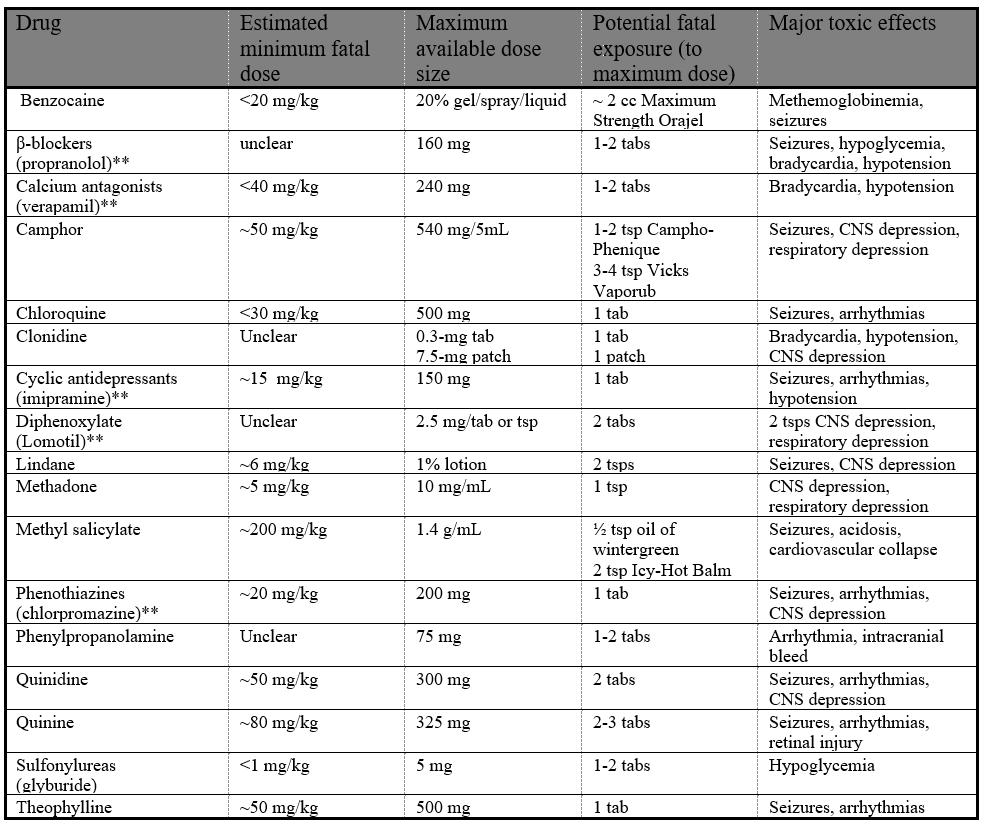 * A “dose” refers to a single pill or roughly a 5-cc swallow.  Calculations are based on a previously healthy toddler weighing 10 kg.
** In broad classes of drugs, specific medications are listed for purposes of dose calculation.
Adapted from Osterhoudt KC, Shannon M, Henretig F.

I am interested in any questions that you would like answered in “Question of the Week.”  Please e-mail me with any suggestions at donna.seger@Vanderbilt.edu