A new study from researchers at Vanderbilt University Medical Center of all deliveries covered by Tennessee’s Medicaid program from 2009-16 (almost 315,000 mother-infant pairs) finds wide disparities in pregnant women receiving medications for opioid-use disorder – medications which have been shown to reduce risk of overdose death and improve pregnancy outcomes.

The study, published July 16 in the journal Substance Abuse, led by Laura Henkhaus, PhD, postdoctoral fellow in the Department of Health Policy and Stephen Patrick, MD, MPH, a neonatologist at Monroe Carell Jr. Children’s Hospital at Vanderbilt and director of the Vanderbilt Center for Child Health Policy, found substantial disparities between non-Hispanic Black and Hispanic women versus non-Hispanic White women, women who primarily speak languages other than English, and women living in rural vs. urban areas.

“There are many challenges to getting connected with medication treatment for opioid use disorder. We examined who is left behind in getting these critical treatments to inform how interventions should be targeted,” Henkhaus said. 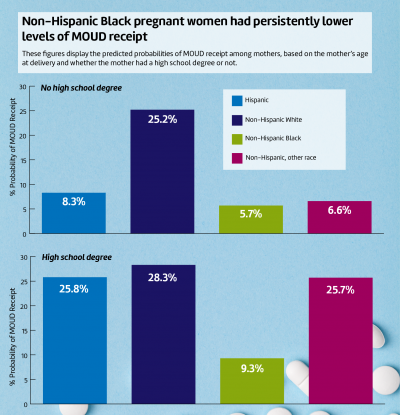 Overall, 72% of the roughly 13,300 pregnant women with presumed opioid use disorder did not receive medications for treatment, which are known to lower risk of overdose deaths in pregnant women and prevent preterm birth.

Researchers said one of the most notable findings in the study is that the disparity in receipt of medications for opioid use disorder between non-Hispanic Black and non-Hispanic White pregnant women remains as large regardless of having a high school degree or not.

“Racism impacts where people live, their access to health care, provider behavior toward patients, and patients’ acceptance of medical recommendations considering their experiences with the health care system. Our study shows that race alone predicted much lower likelihood of medication receipt for Black versus White pregnant women.” Henkhaus said.

Researchers also noted that the study publishes at an important time as the U.S. saw a record in opioid overdose deaths in 2020 during the height of the COVID-19 pandemic.

“Our findings show that many pregnant women, especially Black, Hispanic and rural women, are not receiving medications which have been shown to prevent overdoses,” Patrick said. “This is an urgent call to improve access to treatment for opioid use disorder among pregnant women equitably.”

Researchers said both policy makers and medical providers should consider targeted approaches to address these disparities, such as through improving access to providers of medications for opioid use disorder in neighborhoods of Black, Hispanic, immigrant, and rural communities. Authors also recommend  providers respond with targeted, supportive communication and follow-up to listen to the concerns of pregnant women with opioid use disorder – especially Black pregnant women, Hispanic women, and women who primarily speak languages other than English – as well as to assist in connection to providers of medications for opioid use disorder, considering access barriers.

“There is an immediate need to address the multiple pathways through which Black pregnant women are so often left without recommended treatment,” Henkhaus said.