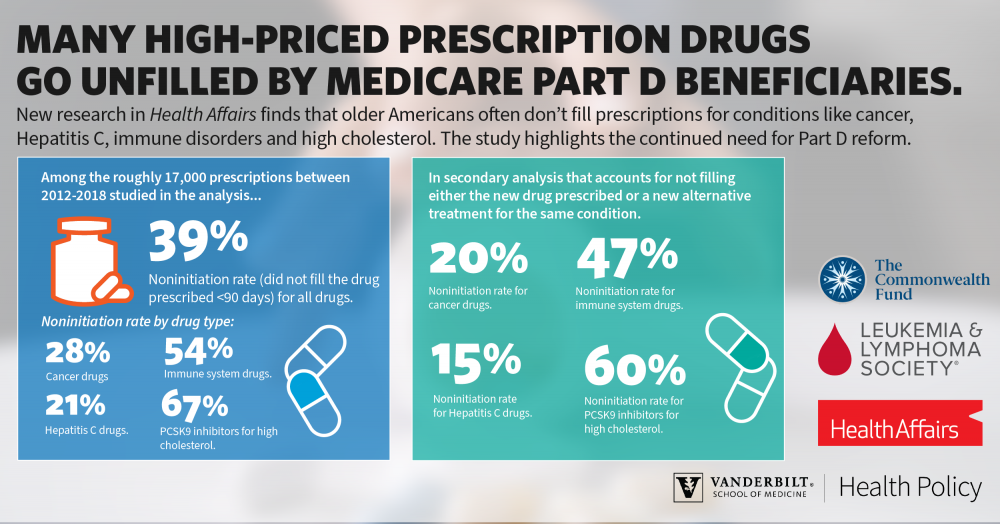 Medicare Part D beneficiaries who did not receive federal subsidies to lower their out-of-pocket costs were nearly twice as likely as others to not fill prescriptions for serious health conditions like cancer or Hepatitis C treatment, according to a new study from Vanderbilt University Medical Center researchers.

The study, published in Health Affairs and led by Stacie B. Dusetzina, PhD, Ingram associate professor of Cancer Research and associate professor of Health Policy, compared medication prescribing records with prescription fill data for fee-for-service Medicare beneficiaries enrolled in Part D drug benefits who were treated at 11 health systems across the U.S. between 2012-2018.

The study is unique in that it was able to link data from electronic health records on prescriptions written from 11 health systems across the country with Medicare Part D claims data on prescription fills to determine whether patients who were newly prescribed a drug with a list price of at least $670 filled the prescription within 90 days. They also assessed if patients who did not fill prescriptions for a new drug began an alternate treatment. Although some did, the overall rates of not starting any drug were still high.

Dusetzina noted in the paper that this research continues to highlight and support the bipartisan efforts to reform the Medicare prescription drug benefit. Congress has discussed several policy proposals, including some that contain annual out-of-pocket caps for Medicare patients.

“Today many Medicare beneficiaries with serious illnesses are not able to afford their treatments due to the outdated Medicare Part D benefit design. Nearly all other health plans in the US include out-of-pocket maximums to protect people from unlimited spending. It is time for Congress to revise the Medicare benefit to make sure that beneficiaries can access the treatments that they need.

The study was funded by grants from the Commonwealth Fund and the Leukemia and Lymphoma Society.