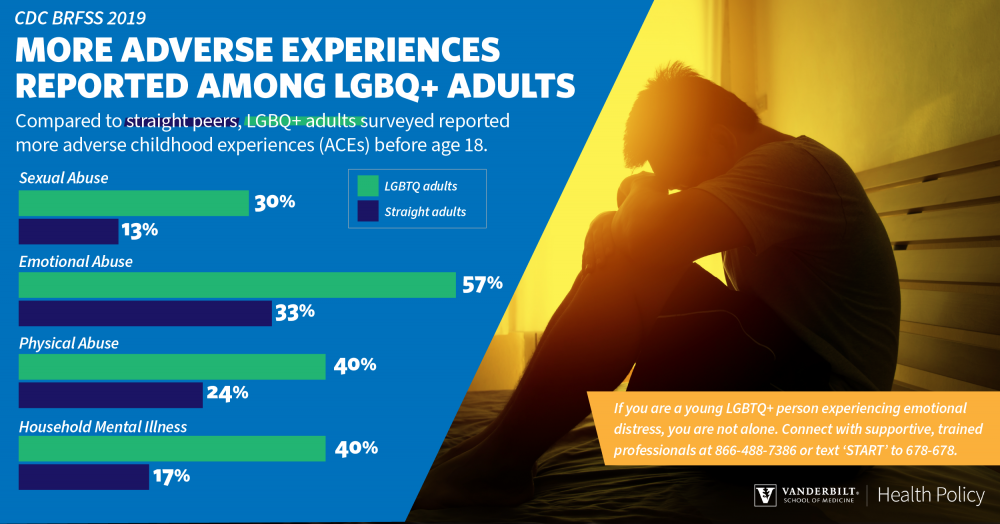 A new study led by researchers at Vanderbilt University Medical Center and Vanderbilt University found that 83% of lesbian, gay, bisexual, and queer (LGBQ) individuals reported going through adverse childhood experiences (ACE) such as sexual and emotional abuse, and worse mental health as adults when compared to their heterosexual peers.

The study, published Feb. 23 in the Journal of American Medical Association Psychiatry, used data from a 2019 Centers for Disease Control and Prevention (CDC) survey that included more than 60,000 people across eight states.

Of the nearly 3,000 LGBQ individuals included in the survey, 83% of LGBQ adults experienced at least one ACE compared to 64% of straight adults. More than half, 52%, of LGBQ adults reported three or more ACEs compared to 26% of straight adults. LGBQ people experienced higher rates of each of the eight defined types of ACEs, but researchers found that the disparities were largest for sexual abuse, household mental illness and emotional abuse.

“LGBTQ+ young people are facing so much hostility, from difficulty finding safe spaces at school to abusive environments at home,” said Nathaniel Tran, lead author and doctoral student in the Department of Health Policy. “Our research highlights the need for teachers, community leaders and family members to help promote better LGBTQ+ health.”

Tran and fellow researchers Gilbert Gonzalez, PhD, assistant professor in the Department of Medicine, Health and Society at Vanderbilt University, and Laura Henkhaus, PhD, postdoctoral fellow in the Department of Health Policy, compared the prevalence of adverse experiences before age 18 across LGBQ and straight adults. 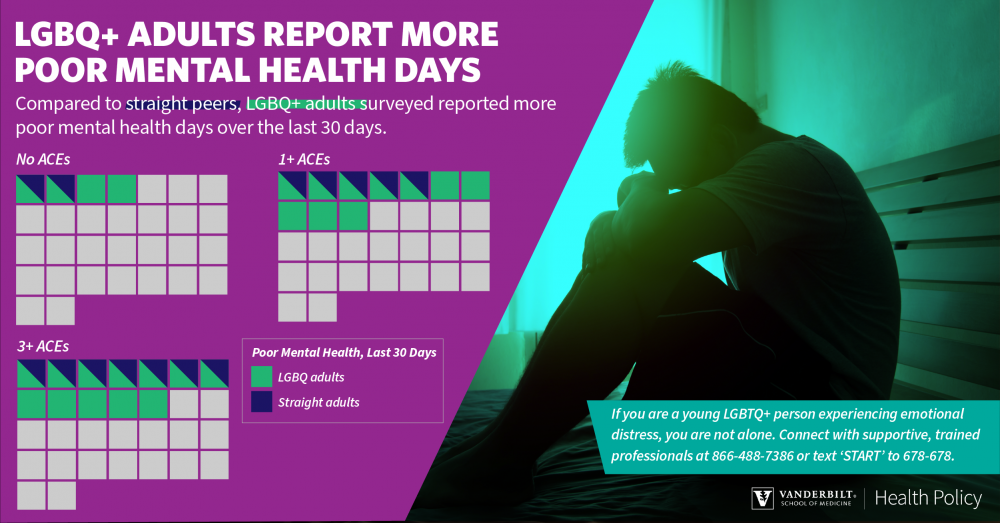 ACEs included physical, emotional and sexual abuse; household mental illness, household substance misuse, household domestic violence, having an incarcerated household member, and parental divorce or separation. The team then looked at how many bad mental health days the survey respondents said they experienced in the past month as adults by the number of ACEs they reported.

“Several studies have shown us that children who experience maltreatment and other adversity often grow up to be adults with a variety of challenges including worse physical and mental health and worse economic well-being,” Henkhaus said. “Our new research demonstrating greater burdens on LGBQ adults who’ve experienced childhood adversity suggests an immediate need for policymakers, schools and communities to respond with protective measures and supports for queer youth.”

Researchers suggest a multi-layered strategy such as training for health professionals and school staff, including school-based nurses and counselors, to create more inclusive learning and health care environments for LGBTQ people.

Because of the growing evidence of ACEs among LGBTQ+ youth, there have been a few notable national and international resources established to assist this population. One standout is the Trevor Project, a national nonprofit organization providing crisis and suicide prevention services and counseling.

Young LGBTQ+ persons experiencing emotional distress, can find assistance from trained individuals 24 hours a day from the Trevor Project, by calling 866-488-7386 or by texting ‘START’ to 678-678.