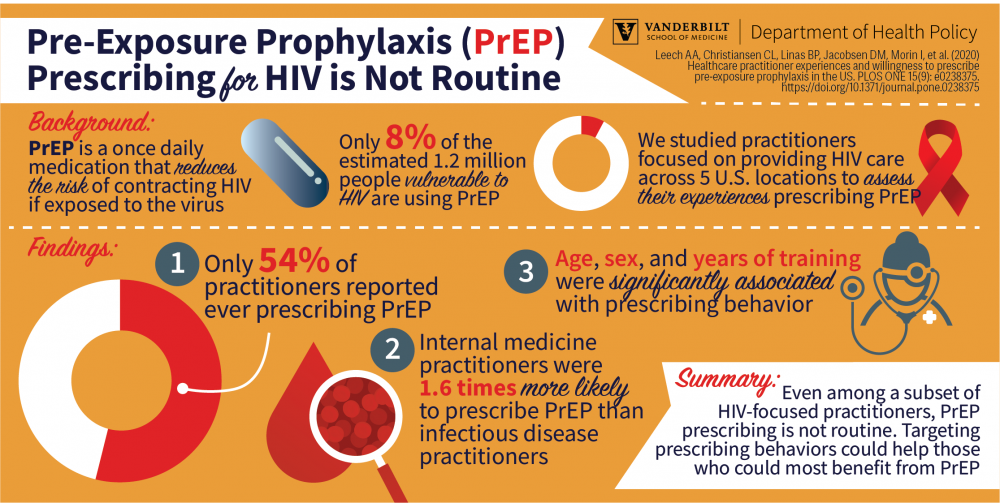 Only about 54% of medical practitioners surveyed say they have prescribed pre-exposure prophylaxis, or PrEP, to HIV-vulnerable patients, a new study by Vanderbilt University Medical Center researcher has found.

The study, led by Ashley Leech, PhD, assistant professor of Health Policy, surveyed 519 practitioners in five major U.S. cities who attended a continuing medical education course on HIV between March and May 2015. The study published Sept. 3 in PLOS One.

PrEP is a once-daily medication for people without HIV that is a widely accepted method of preventing HIV transmission, but less than 10% of the more than 1 million people vulnerable to HIV are taking PrEP, according to the study.

“With a U.S. policy goal to eradicate HIV by 2030, practitioners are central to ensuring the delivery of PrEP across care settings,” Leech said. “Our findings, however, indicate that even among a subset of HIV-focused practitioners, PrEP prescribing is not routine.”

The study found that internal medicine prescribers were 1.6 times more likely to prescribe PrEP than infectious disease practitioners, which researchers said was an indicator of how important internal and family medicine practitioners are in assessing and mitigating risk in their patients.

Longstanding confusion or disagreement between HIV and primary care practitioners over who should be responsible for prescribing this preventive medication may partly explain the slow adoption of PrEP among practitioners, Leech said.

Age, years of training, and sex of the independent prescribers were also significantly associated with prescribing experience.

The study also found that practitioners might be more willing to prescribe PrEP as a first clinical step for persons who inject drugs than previously indicated, with more work needed to effectively communicate with priority groups vulnerable to HIV and to reach individuals who could most benefit from PrEP, according to Leech.

“While a number of factors could impact PrEP prescribing, including patients’ low familiarity with the drug or practitioners’ lack opportunity in offering PrEP, in order for the drug to be effective at eliminating HIV in the United States in the next 10 years, the proportion of prescribing needs to increase, with more effort placed on identifying risk across populations and clinical specialties.”