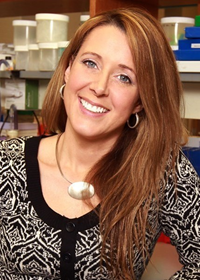 Many of the physiologic signaling pathways that contribute to tissue development and function are often commandeered by tumor cells to promote their own growth and metastasis. It is becoming increasingly clear that signaling pathways necessary for growth of the breast epithelium during puberty and pregnancy, and for breast remodeling after lactation are abnormally activated during various stages of tumor formation and progression. The long-term goal of our research is a greater understanding of these signaling pathways, and how they contribute to both mammary gland physiology and breast cancer.

Much of our research focuses on signaling pathways induced by the ErbB family of receptor tyrosine kinases, which include EGFR, ErbB2, ErbB3, and ErbB4. Evidence suggests that three of these family members, EGFR, ErbB2, and ErbB3, are required for increased growth of the mammary epithelium during puberty and pregnancy. Their pathologic overexpression contributes to breast tumor formation and increased malignancy. Much of our current research examines the specific contributions of ErbB3 to breast cancer progression, and its potential as a therapeutic target in ErbB2-expressing breast cancers.

In contrast, ErbB4 is required for lactational differentiation of the mammary epithelium. The role and prognostic value of ErbB4 in breast cancer remain unclear, and our recently published work is aimed at understanding how ErbB4 expression impacts the behavior of normal mammary epithelial cells. Future studies will build on this work and focus on how ErbB4, and the signaling pathways activated in response to ErbB4, impact growth and progression of mammary tumors.