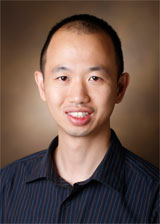 Ken has always been a proponent of combining computational analysis and experiments to solve complex problems in biology. Ken did his graduate work in the laboratory of Dr. James Dennis at the Lunenfeld-Tanenbaum Research Institute in Toronto, working on how the N-glycan modification pathway regulates ensembles of cell surface signaling receptors using computational modeling. Ken was the first Ph.D. graduate (2008) from the program of Proteomics and Bioinformatics (now known as Genome Biology and Bioinformatics) at the University of Toronto, Canada. He then went on to do a joint postdoctoral fellowship in the laboratories of Kevin Haigis at Massachusetts General Hospital/Harvard Medical School and Douglas Lauffenburger at MIT. There, he combined mouse genetics with network modeling to decipher how combination of signaling activities synergistically control complex phenotypes in the gut. Ken started his laboratory in the Epithelial Biology Center at Vanderbilt in March of 2013, with a primary appointment in the Department of Cell and Developmental Biology. Ken’s training is truly interdisciplinary, ranging from stochastic computational modeling to surgeries on small animals. His work has been published in Cell, Science Signaling, and PLoS Biology to name a few.

Ken is interested in how cells communicate with its environments (including neighboring cells, cells from different systems, microbial components, etc.), and how cells process environmental data to generate in behavioral and functional outputs. Furthermore, Ken is interested in understanding the basis of why and how cells behave differently from each other in tissue, and how these behaviorally distinct cells act together in a functional organ. He believes that these multicellular communication principles can shed light on complex diseases like cancer, where a tumor is aberrantly organized to function as its own organ. To address these challenges, Ken makes use of high-dimensional technology for conducting single cell signaling analysis in intact tissues (mouse and human), and generate mathematical models of how multicellular components process information as a network. His model system currently is the intestinal epithelium, which is an organ that interacts intimately with the microbiome and immune system. He hopes that by understanding complexities at the molecular, cellular and tissue levels, one can develop better and smarter means to combat complex diseases in the clinic.

The intestinal epithelium is a single cell layer that separates the trillions of microbes in the gut lumen from the host’s body. The central goal of my lab is to understand how the inflammatory microenvironment, the so-called “niche”, signal to epithelial cells to change their phenotypes. Microenvironmental signaling is exquisitely regulated to constrain and maintain a homeostatic state between epithelial cells, luminal microbes, and underlying immune cells. A disrupted balance leads to diseases such Inflammatory Bowel Disease and colorectal cancer. My lab is broadly interested in understanding how niche signals are integrated and interpreted to result in cell fate decisions, such as cellular decisions to differentiate into one cell type versus another. To accomplish this goal in highly complex and heterogeneous tissue environments, we apply high content single-cell analyses and computational modeling to dissect signaling network states of individual cells isolated from animal models and human patients. Our key experimental approaches are DISSECT-CyTOF, which we developed in the Lau lab (Simmons et al., 2015), and multiplex immunofluorescence imaging to query single-cell protein states. Using these novel approaches, we aim to unravel the degree of heterogeneity and plasticity of epithelial cell populations, such as cancer stem cells, in vivo, and to translate such knowledge into therapeutically tractable targets.