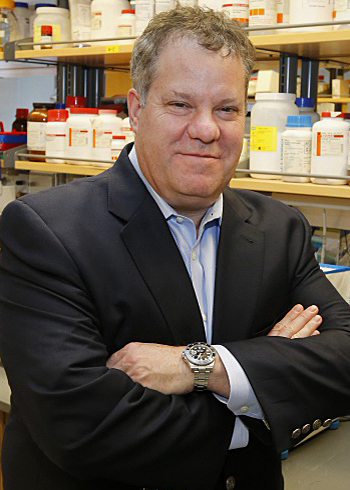 Dr. Wilson is a graduate of the College of Arts and Sciences at Cornell University in Ithaca, NY, where he was in the College Scholar Honors Program. He received his M.D. from Harvard Medical School. He completed residency in Internal Medicine at Case Western Reserve University Hospitals, followed by Fellowship in Gastroenterology at University of Chicago Medical Center, where he was an NIH T32 trainee and recipient of a Research Fellowship Award from the Crohn’s & Colitis Foundation of America (CCFA). He was then recruited to University of Maryland School of Medicine as an Assistant Professor, and was promoted to Associate Professor with tenure. He was able to secure funding from the CCFA, followed by NIH K08 and R01 funding and a VA Merit Review. He served as the Gastroenterology Section Chief at the Baltimore VA Medical Center from 2002-2005. He moved to Vanderbilt University Medical Center in 2005 as Professor of Medicine, where he was recruited to build a mucosal immunology research program.

Keith T. Wilson, M.D. holds the Thomas F. Frist Sr. Chair in Medicine, and is Professor of Medicine, Cancer Biology, and Pathology, Microbiology and Immunology at Vanderbilt University School of Medicine. He is a physician-scientist in the area of Gastrointestinal Research. He is a Staff Physician at the VA Tennessee Valley Healthcare System in Nashville, where he does endoscopy and GI consults. He is the Director of Research in the Division of Gastroenterology, Hepatology and Nutrition and formerly was the Director of the GI Fellowship Program from 2005 to 2015.

His research is focused on GI inflammation and carcinogenesis, with studies  investigating both Helicobacter pylori-associated immune dysregulation and gastric cancer development and Inflammatory Bowel Disease. The work in his laboratory related to polyamines in gastric carcinogenesis has led to a clinical trial in Latin America in which an inhibitor of polyamine synthesis, difluoromethylornithine (DFMO, eflornithine) is being used in human subjects with gastric precancerous lesions.

Dr. Wilson is the Founding Director of the Vanderbilt CMIC. He holds multiple grants from NIH and the Department of Veterans Affairs. He is the Associate Director of the Vanderbilt Digestive Disease Research Center, funded by an NIH P30 grant, where he directs the Pilot and Feasibility Grant Program. He is also the Director of the Digestive Disease Research component of the NIH T35-funded Summer Research Training Program and he has mentored over 100 trainees. He has presented the work from his laboratory at numerous international meetings, including the Keynote Lecture at the 2016 American Society for Oncology GI Cancer Symposium. He has been elected as the 2017 Vice Chair and 2019 Chair of the Gordon Research Conference on Polyamines.

My laboratory is focused on gastrointestinal mucosal inflammation and carcinogenesis. We study the host immune response to the gastric pathogen Helicobacter pylori that causes peptic ulcer disease and gastric cancer. This includes the innate immune response in macrophages and the identification of ways that this response is ineffective. We have also elucidated mechanisms whereby epithelial responses are inappropriate, leading to risk for cancer development. We study novel mechanisms for inflammation and cellular/DNA damage, which leads to increased cancer risk.

We have reported that H. pylori induces the enzyme spermine oxidase (SMOX), originally known as polyamine oxidase 1, which utilizes the polyamine spermine as substrate. Generation of H2O2 by SMOX results in mitochondrial membrane depolarization, cytochrome c release, and apoptosis. Spermine itself contributes to the inadequacy of the host response, by blocking translation of inducible nitric oxide (NO) synthase (iNOS) and hence NO production that is needed for the killing of H. pylori. Upregulation of SMOX causes oxidative stress in gastric epithelial cells that leads to both apoptosis and DNA damage. Induction of ornithine decarboxylase (ODC) that generates polyamines also leads to apoptosis of macrophages, contributing to loss of host innate immunity to H. pylori. We have shown that induction of the transcription factor c-Myc by H. pylori enhances ODC transcription and has a causal role in macrophage apoptosis. We have also implicated formation of a specific AP-1 complex in the activation of c-Myc.

We are utilizing clinical material from a large cohort of human subjects from Colombia, South America where H. pylori infection prevalence is very high, but gastric cancer risk is 25-fold higher in the Andean mountains when compared to the coastal region. We have found that SMOX-dependent oxidative stress is increased in gastric epithelial cells in vivo in the subjects at high risk for gastric cancer and that H. pylori clinical strains from these subjects induce more SMOX and oxidative DNA damage both in vitro and in vivo in a gerbil model. Furthermore, inhibition of ODC or SMOX reduces gastric cancer in the gerbil model. Studies are ongoing to pursue the mechanisms involved in the differential induction of SMOX and DNA damage.

We are also pursuing studies on immune dysregulation in inflammatory bowel disease. This includes work on arginine availability/transport, polyamines, and nitric oxide. We have reported that levels of the amino acid L-arginine are increased in the serum of humans with ulcerative colitis. Because L-arginine is important in regulation of epithelial integrity and immune function a defect in the utilization of L-arginine could contribute to the disease pathogenesis. Consistent with this, we have shown that treatment with L-arginine improves colitis in mouse models and that mice lacking an inducible L-arginine transporter have increased disease activity.

Our funded studies are focused on:
1) Mechanisms of H. pylori induced DNA damage and immune dysregulation, with an emphasis on the effects of polyamines and their oxidation (PI, R01 grant)
2) The role oxidative and nitrosative stress in the development of gastric cancer in Colombia, and the importance of H. pylori strains from regions of low and high gastric cancer risk in modulation of host responses (PI, P01 grant)
3) Importance of arginine metabolism in the immune response and disease progression associated with H. pylori-induced disease (PI, VA Merit Review Grant)
4) Role of EGFR signaling and polyamines in epithelial dysfunction in H. pylori infection and carcinogenesis (PI, project on P01)
5) Inhibition of polyamine synthesis with difluoromethylornithine in human subjects in Colombia and Honduras with precancerous gastric lesions (PI, R01 grant).
6) Arginine and other amino acids as immunomodulatory agents and potential therapies in colitis and colitis-associated cancer (PI, R01 grant)
7) Clinical study on amino acids in ulcerative colitis (PI- R01 supplement; funding completed, analysis ongoing)