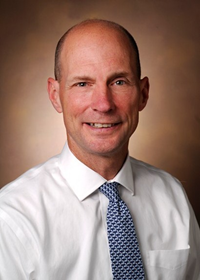 Dr. Sherwood received his PhD in Physiology from Tulane University, where he studied the immunomodulatory properties of beta glucans. After completing a post-doctoral research fellowship at Northwestern University, he earned the MD degree from the University of Chicago. He completed a residency in Anesthesiology at Northwestern University and then joined the faculty in the Department of Anesthesiology at the University of Texas Medical Branch. After 14 years at UTMB, he moved to Vanderbilt. His research interests are in antimicrobial immunity, immunomodulation and systemic inflammation.

Our research group is studying several aspects of sepsis and the systemic inflammatory response syndrome. We are studying mechanisms of sepsis-induced systemic inflammation and organ injury with emphasis on the roles of natural killer (NK) and T lymphocytes. Current studies are being performed to evaluate the mechanisms of NK and T cell activation and chemotaxis during sepsis with emphasis on the chemokine receptor CXCR3 and its ligands, CXCL9 and CXCL10. Our studies show that CXCR3 activation is crucial for NK cell trafficking during sepsis and that CXCR3 blockade will decrease inflammation and organ injury in experimental models of sepsis. Our interest is to further understand the contribution of CXCR3 activation in the pathogenesis of sepsis and develop clinically relevant interventions to block CXCR3 and improve outcome.

In another set of studies, we are evaluating the role of IL-15 in the pathogenesis of sepsis. IL-15 is an important activator of NK and T cells during periods of inflammation. Our preliminary studies show that IL-15-deficient mice are resistant to sepsis-induced inflammation and organ injury. Further studies are underway to characterize the contribution of IL-15 to sepsis-induced pathobiology.

In further studies, we are evaluating the immunomodulatory properties of TLR4 agonists and their ability to modify the host response to systemic infection. Our studies show that the TLR4 agonists lipopolysaccharide and monophosphoryl lipid A are potent immunomodulators that alter systemic cytokine production and enhance innate resistance to bacterial infections. The improved resistance to infection is caused by neutrophil expansion and enhanced neutrophil functions. Our interest is in defining the mechanisms by which TLR4 agonists promote the antimicrobial functions of neutrophils and develop TLR4 agonists as agents that can be used to improve the resistance of critically ill patients to infection.