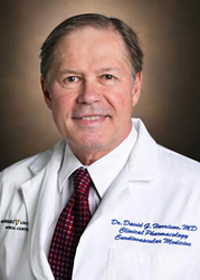 How inflammation and the adaptive immune response contributes to hypertension

Dr. Harrison is the Betty and Jack Bailey Professor of Medicine and Pharmacology.  He is also the Director of Division of Clinical Pharmacology and Director of the Center for Vascular Biology.

His career has been devoted to basic research related to vascular function, the practice of cardiology and the education of young physicians. Dr. Harrison has been an Established Investigator of the American Heart Association and has served on numerous committees for the AHA, including the AHA Scientific Sessions Planning Committee, the AHA Research Committee, the Novartis Award committee and the Credentialing committee for the Council on Circulation, which he chaired. He served as the Chairman of the American Heart Association Council on Circulation. Dr. Harrison has served as the Chairman of the National Institutes of Health Experimental Cardiovascular Studies Study Section (ECS). Dr. Harrison has served on the editorial boards of multiple journals, including Circulation, Circulation Research, Atherosclerosis Thrombosis and Vascular Biology, the Journal of Clinical Investigation and Hypertension. He has given numerous invited and named lectures related to his research, including the Robert Furchgott Lecture for the 8th Symposium on Mechanisms, Robert M. Berne Distinguished Lecture to the American Physiology Society and the Sir George Pickering Lecture to British Hypertension Society Annual Scientific Meeting. In 1992, he was elected to the American Society of Clinical Investigation and in 2002 to the Association of American Physicians.  In 2004, Dr. Harrison received the Novartis Award from the American Heart Association Council on High Blood Pressure, which is the highest award given for hypertension research.  In December of 2010, Dr. Harrison received the 2010 Distinguished Scientist Award at the annual meeting of the American Heart Association (AHA).  This award is the highest honor given to a cardiovascular investigator for extraordinary contributions to the understanding and treatment of cardiovascular disease.  Dr. Harrison was selected for his many contributions to understanding the mechanisms of atherosclerosis and hypertension.

Our laboratory has been focused on understanding how inflammation, and in particular, the adaptive immune response contributes to hypertension. Several years ago, we found that T cells are essential for the development of hypertension. We have shown that various hypertensive stimuli, including angiotensin II, norepinephrine and DOCA-salt cause activation of T cells and leads to their accumulation in the perivascular fat and kidneys. Our data indicate that T cell-derived cytokines such as IL-17 and TNF-a enhance vasoconstriction and sodium retention, leading to the hypertensive phenotype. Central signals derived from the circumventricular organs contribute to T cell activation, and manipulation of signals from this region affect T cell activation and the eventual elevation in blood pressure caused by angiotensin II. We are attempting to understand mechanisms involved in T cell activation in response to hypertensive stimuli. We have recently shown that gamma-ketoaldehydes, or isoketals adduct to proteins in hypertensive mice and humans, and that these are immunogenic. These modified proteins seem to act as "auto-antigens" that promote dendritic cell and ultimately T cell activation in hypertension.