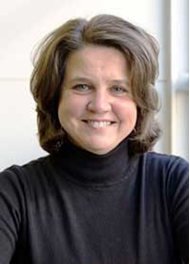 Immunological mechanisms of autoimmunity in atherosclerosis

Dr. Major received her B.S. in Biology from Wheeling Jesuit University, Wheeling, WV. She conducted her graduate work in the laboratory of Dr. Christopher Cuff in the Department of Microbiology and Immunology, West Virginia University, Morgantown, WV. There she studied the mucosal immune response of the small intestine against enteric viruses. After earning her Ph.D. in 1998, Dr. Major came to Vanderbilt as a postdoctoral fellow in the laboratories of Drs. MacRae Linton and Sergio Fazio where she studied immune-mediated mechanisms of atherosclerosis. Dr. Major has been a faculty member in the Division of Cardiovascular Medicine since 2004. She has a secondary appointment in the Department of Pathology, Microbiology and Immunology.

The broad research focus of Dr. Major's laboratory is to understand immunological mechanisms of cardiovascular disease, specifically atherosclerosis. Atherosclerosis is the number one cause of mortality in developed countries and it is known that both lipids and immunity play significant roles. Work performed in her laboratory has significantly impacted our understanding of how the immune system modulates atherosclerosis as well as how dyslipidema and the atherosclerotic environment influence normal immune function.

It is widely accepted that increased circulating cholesterol (especially LDL) and modifications of lipids are the main culprits in the development of atherosclerosis in the general population. However, over the past three decades, increased focus has been on the role of immune cells, such as B cells and particular subsets of T cells, in the atherogenic process. Dr. Major's laboratory is interested in understanding the relationship between normal and abnormal T and B cell biology and atherosclerosis. Specifically, her lab is trying to understand:

- the relative roles of T and B cells in the atherogenic process;
- how autoimmunity (specifically systemic lupus erythematosus, or lupus) exacerbates the atherosclerotic process;
- how the hyperlipidemic environment associated with atherosclerosis affects immune function (specifically T cells, B cells and immune complexes);
- what molecules, typically associated with lipid homeostasis in health, play roles in lymphocyte activation.

The preclinical models that Dr. Major uses in her studies are the mouse model of atherosclerosis (LDL-receptor deficient or apolipoprotein E deficient) and the mouse model of spontaneous lupus (B6.Sle). Both of these animal models of human disease have been greatly characterized and have pathogenic characteristics relevant to their human disease counterparts. Dr. Major has developed and characterized a novel animal model of lupus-accelerated atherosclerosis by reconstituting lethally-irradiated LDL-receptor deficient mice with the hematopoietic cells from lupus-susceptible mice. The result is an animal that develops lupus and lupus-accelerated atherosclerosis very similar to human lupus patients. The proceeding is a brief narrative of Dr. Major's ongoing projects in the laboratory focused on understanding the relationship between normal and abnormal immune function and atherosclerosis.