In March-May of this year, Rhode Island had 14 overdose deaths that were related to a new injectable synthetic opioid.  All of these cases occurred in intravenous drug users who were located in the northern part of the state.  The RI Department of Health, working with the CDC, confirmed that the new synthetic opioid is acetyl fentanyl.  Ages of the victims ranged from 19-57 years old, ten of the fourteen were males. Analytical toxicology analysis showed other drugs in some of the victims.  Forty five percent of them died in the ED, with 36% dying in the home.  Details of how they presented or died in the ED have not been published yet.  Pharmaceutical fentanyl was not identified in any death.  The available evidence suggests multiple routes of administration including injection, and insufflation. 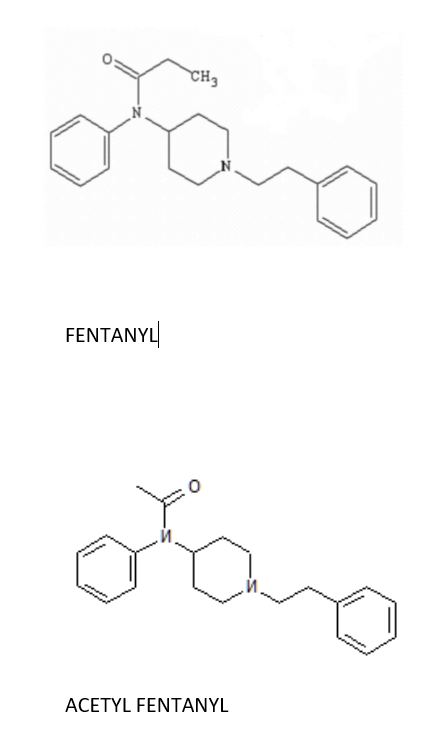 Fentanyl is 30-50 times more potent than heroin.  Acetyl fentanyl is a fentanyl analog, and is 5-15 times more potent than heroin, in animal studies.  Acetyl fentanyl has not been previously documented in illicit drug use.  It was initially picked up as fentanyl on medical examiner’s drug ELISA testing, but on confirmatory testing unusual peaks were identified, and no fentanyl was identified.  Eventually acetyl fentanyl was identified as causing the initial fentanyl positive result.  Confirmatory testing can be performed to detect acetyl fentanyl, but this is not widely available.  MOST hospital’s urine drug screens do not even routinely screen for fentanyl.  Testing for fentanyl usually requires a separate order and screen besides the routine urine drug screen.   CDC is asking analytical toxicology laboratories that have a positive screen for fentanyl, to perform GC/MS confirmatory testing on samples obtained from illicit opioid-related overdose patients.
Pennsylvania has also recently confirmed acetyl fentanyl in some overdose deaths.  Because of this initial outbreak the CDC has released a health advisory the Health Alert Network (http://emergency.cdc.gov/HAN/han00350.asp; 20 June 2013), and an article in MMWR is currently under preparation.
Because of this novel illicit synthetic opioid, the CDC recommends that “…emergency department and emergency response services to exercise increased vigilance in promptly identifying suspected opioid overdose patients and taking appropriate action.”  Treatment with naloxone is expected to have the same reversal effect as for fentanyl.  However, larger doses of naloxone may be required because of acetyl fentanyl’s higher potency than heroin.