Earlier this month, in the class lecture, "Staying Healthy: Hide Your Metal", Dr. Jennifer Gaddy introduced the importance of metal ion homeostasis, an important balance in which cells must keep an adequate level of metals that serve as cofactors for various enzymes and other proteins, but also, avoid metal ion intoxication (Chandrangsu et al., 2017). Metal ions are essential for several cellular processes such as cellular growth, cellular respiration, and stress responses. The vertebrate host serves as a rich source of nutrient metals for all microorganisms, which have a strict growth requirement for transition metals, which is around 10 -6 – 10 -8 M. In addition to cellular growth, bacteria require cofactors for stress responses. When bacteria encounter environmental stressors, cytoplasmic enzymes are essential for repressing the stressors. The host vertebrate's common stressors are reactive oxygen species (ROS), which are highly reactive molecules that are generated during mitochondrial oxidative metabolism. However, several enzymes used to break down harmful ROS are called superoxide dismutase (SOD), and they use an array of metal cofactors such as manganese, iron, zinc, and copper. In the case of the finite number of metals, SOD is not functional and cannot detoxify ROS. Accumulation of ROS can be detrimental for the host and may damage nucleic acids, proteins, and other cellular components. Another topic covered during the lecture was cellular respiration, a set of metabolic reactions and processes in which cells convert chemical energy from oxygen or nutrients into adenosine triphosphate (ATP).  During respiration, the electrons are transferred by reduction/oxidation or by cytochromes oxidase complex via catalysis, in which the free energy generated by electron transfer is utilized by ATP synthase. The final step in the process is catalyzed by complex IV (cytochrome oxidase), where electrons are transferred from cytochrome c to the molecular oxygen, which serves as the terminal electron acceptor in aerobic respiration. Cytochromes have various cofactors necessary for cellular respiration, such as ferric sulfur clusters, iron-sulfur clusters, copper centers, and the main requirement is heme (Landolfo, 2008).

Vertebrate immune systems developed revolutionary defense mechanisms in order to protect invading pathogens. Nutritional immunity is when the host exploits microbial requirements for transition metals by sequestering them to limit pathogenicity during the infection. Concentrations of metals, such as iron and zinc, decline fast during the infection, and the reason for it is to starve invading pathogens of these essential elements (Begg, 2019). Nutritional immunity is regulated by several proteins such as S-100A, transferrin, lactoferrin, heme, and hemoglobin. The large S-100A family of calcium-binding proteins are found in vertebrates and are important for defense against infection since many S-100A proteins have antimicrobial properties. One of the best-studied is calprotectin (S100A8/A9), which makes up approximately 40% of the neutrophil cytoplasm's protein composition and can bind zinc, manganese, iron, and copper. Another vital protein, S-100A12, also known as calgranulin C, binds both zinc and copper and is involved in generating superoxide species. Studies have shown that genetic mutation in the metal-binding sites of S-100A proteins disrupts proteins' antimicrobial activity. Lactoferrin and transferrin, dual-lobed multifunctional glycoproteins found in a vertebrate, bind and mediate the transport of iron through the blood plasma. Increasing concentrations of lactoferrin and transferrin inhibit the growth of various pathogens over time. Most of the body's iron is found in the Red Blood Cells (RBCs), specifically in protein hemoglobin, which is essential for transferring oxygen in the blood. Hemoglobin comprises four polypeptide chains, two alpha and two beta chains, with each chain attached to a heme group composed of a porphyrin ring attached to an iron atom.

To bypass metal starvation, microorganisms deploy metal piracy systems, such as siderophores, zincophores, and cuprophores, to exploit the transition metals. Siderophores, zincophores, and cuprophores are low molecular weight compounds that can bind transition metals with high affinity. Deployment of toxins, such as hemolytic toxins, is another mechanism to bypass metal starvation. Hemolytic toxins destroy RBCs and release free hemoglobin, which is then degraded by hemoglobin protease to release heme, following secretion of hemophores, which capture heme and shuttle it across the membrane. Additionally, in response to zinc starvation, bacteria can alter their outer membrane, which causes biofilm formation. Lastly, Dr. Gaddy concluded the lecture by talking about metal toxicity. Metal toxicity can cause protein denaturation, disrupt the cell membrane, inhibit transcription and cell division, and inhibit enzyme activity. One of the most common deleterious effects of metal toxicity is mismetallation, which results in enzyme activity inhibition because the wrong ion has replaced the correct cofactor. Bacteria respond to metal toxicity by deploying efflux pumps to exclude metal ions out of the cell.  Recent studies have shown that bacteria can highjack host metal-binding proteins to help mitigate metal toxicity. 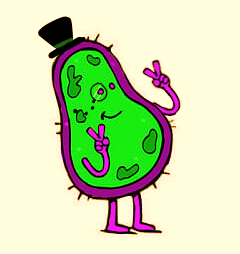