The Vanderbilt Institute of Global Health (VIGH) will join Yale University and the University of Liberia College of Health Sciences (ULCHS) to establish a public-private-academic hub for research utilization in the Liberian health sector and an academic network to strengthen Liberia’s education and health sectors as part of a five-year, $15 million federal project announced this week.

Funding for the Applying Research for a Healthy Liberia project comes from the United States Agency for International Development (USAID), Bringing Research to Impact for Development, Global Engagement, and Utilization (BRIDGE-U) program. It will allow the three institutions to build on a longstanding partnership to create the Center for Teaching, Learning, and Innovation (CTLI) in Liberia. The grant was one of two announced by the federal agency on July 20.

Marie Martin, PhD, MEd, assistant professor of Health Policy and associate director of Education and Training at VIGH, will be the principal investigator for Vanderbilt University Medical Center’s involvement in the project and will join researchers at Yale and the University of Liberia to lead VUMC’s involvement in building CTLI and further establish partnerships with public and private sector stakeholders.

“This grant is an incredible next step in realizing our collective vision of a stronger and healthier Liberia through intentional capacity building initiatives. It builds on the productive partnership we have established with ULCHS and Yale to strengthen medical training, subspecialty capacity and research training in the country,” Martin said.

ULCHS is the leading educational institution for developing Liberia’s clinicians, researchers, health policymakers and innovators. As one of only two public universities in the country, it is poised to become a globally recognized leader in research utilization, meaningfully connecting academics with policymaking, innovation, and clinical practice.

“Many donor-funded projects implement programming without building systems to install long-term institutional knowledge or capacity for independent initiatives within the host country institutions. We have designed this project with systems-building and institutional sustainability at its core, and we are looking forward to the results,” Dahn added.

The BRIDGE-U program will enhance ULCHS’s role as a national hub for research and interprofessional training by getting a Center for Teaching, Learning, and Innovation fully operational and connecting ULCHS faculty and students directly with policymakers, clinicians, and private-sector innovators to translate research outputs.

As an academic hub, CTLI will comprise an experiential learning and assessment lab, a health start-up incubator as well as initiatives to translate and implement existing research findings, and programming to impart research utilization competencies.

The BRIDGE-U program is part of USAID’s Higher Education Solutions Network. This network provides a platform for USAID to partner with higher education institutions from around the world to address critical development challenges, build local capacity and cultivate innovation. 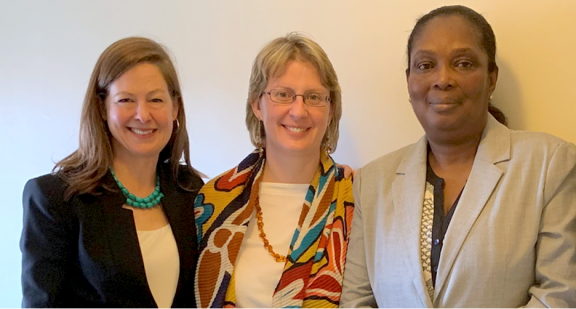