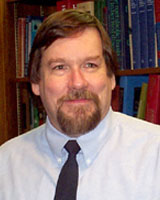 Research in the laboratory is focused on vascular biology and how changes in the vasculature can affect heart disease, stroke, and cancer. The studies correlate microscopy and biochemistry evidence to determine what changes occur and how these changes affect the disease process. Currently, two interrelated studies are ongoing.

In the first, we are trying to learn why in atherosclerosis the lysosomes of macrophages and smooth muscle cells in the artery wall become bloated with cholesterol. To do this, we use cultured cells and look at the uptake and processing of cholesterol. The cholesterol is delivered to the cells within modified lipoproteins, similar to those found in patients with high blood cholesterol levels. . We compare quantitative microscopic observations on the uptake and fate of the lipoproteins with measures of key biochemical pathways in cholesterol metabolism. In this way we are learning why lysosomes cannot clear their cholesterol load. To relate these tissue culture experiments to the disease process, we also compare the appearance of these tissue culture cells to that exhibited by cells during various stages of atherosclerosis (hardening of the arteries). This is also allowing us to investigate the effect this bloating has on progression of the disease. Among our findings, we have shown that lysosomal cholesterol accumulation occurs in two stages. In the initial stage, cholesteryl esters delivered by lipoproteins are broken down in th lysosome but the resulting unesterified cholesterol cannot escape the lysosome. In later stages, and perhaps related to the free cholesterol accumulation, hydrolysis of the cholesteryl esters is inhibited. This produces lysosomes rich in both free and esterified cholesterol. We are using these findings to explore how alterations in cell lipid metabolism can affect progression of cardiovascular disease and potential effects on cancer progression.The second major area of research in the laboratory correlates high density lipoprotein (HDL) structure with alterations in its function. High density lipoprotein is known as the "good cholesterol" carrier in you blood because it removes cholesterol from peripheral organs, such as atherosclerotic arteries and fat cells, and returns it to the liver for clearance. However, HDL has a variety of functions and impairment of these functions can cause a variety of disease from atherosclerosis to diabetes and kidney disease. HDL is a complex mixture of lipids and proteins and so it can change structure depending upon its composition. A number of proteins can be incorporated into HDL and these can undergo changes in shape and function depending upon the size of the HDL particle and the lipids surrounding the proteins. We are using biochemical analysis, high resolution microscopic imaging (including cryo-electron microscopy and image analysis) and molecular modeling (via computers) to define the structure function relationships involved in modulating HDL's functions.