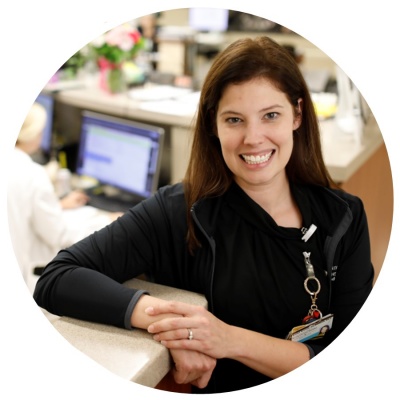 What has been your career path? Where are you now on your path?

I initially completed a BA in Art History.  Five weeks later I saw a baby born and decided to become a midwife.  I started the BSN program at MTSU.  Later, I started working on 8 South as a nurse extern.  After completing my BSN, I started in the first class of VUMC Nurse Residents which launched in 2008.  I became Chemotherapy certified in 2008. After about a year, I started to recognize that it was more important to me to be an expert in the specialty of inpatient medicine than it was for me to pursue women’s health and midwifery. I was really beginning to love how limitless the world of inpatient medicine is. Every day inpatient medicine nurses have new opportunities to learn and grow as professionals, and I loved being a part of that through coaching and precepting.  In 2010, I advanced on the clinical ladder to RN3. In 2011, I started an FNP MSN program at VUSN.  In 2012, I won a couple of preceptor awards and became the interim Nursing Education Specialist for 8S.  I graduated from my MSN program in 2013 and passed the FNP boards.  In 2014, I took on the Clinical Staff Leader role and became certified in Medical/Surgical nursing.  In 2015, I returned to my dream job as a Nursing Education Specialist in Inpatient Medicine at Vanderbilt University Hospital. In 2018, I became the Director of Nursing Education for the Adult Enterprise. I’m so happy to have the opportunity to support the professional development of RNs every day. Now, I'm just trying to get good at my job!

How did Vanderbilt University Medical Center's Nurse Residency Program support your transition to practice?  What has the experience meant to you?

The Nurse Residency Program created a firm foundation for my career.  The foundation behind the program let me know that Vanderbilt was invested in me and it has made me want to pay it back to new hires.

Did you consider other residency programs?  Why did you choose Vanderbilt?

No. I initially was attracted to the proximity to my home.

What is it about being a Vanderbilt nurse that makes you proud?

It's really important to me to help the Nursing Education Specialists because they’re essential in supporting the Nurse Residents.