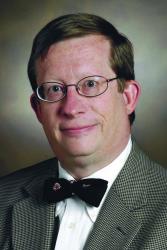 Randolph A. Miller, M.D., is the Cornelius Vanderbilt Professor (Emeritus) of Biomedical Informatics and the University Professor of Biomedical Informatics, Medicine, and Nursing. His current interests are in development and evaluation of medical decision support systems and their corresponding knowledge bases; clinical terminology systems; ethical and legal implications of developing and using clinical information systems; and, institutional-level informatics initiatives.

After moving to Vanderbilt, Dr. Miller served as Chair of the Division of  Biomedical Informatics from 1994-2004 to and as the founding Chair of the Department of Biomedical Informatics (DBMI) from 2001-2004. The initial DBMI mission was to develop and evaluate leading-edge biomedical software applications to improve the quality of care, promote research, and enhance patient safety. With faculty and staff colleagues, DBMI built Vanderbilt’s CPOE and EMR systems “from scratch”.  Dr. Miller also helped Drs. Joshua Denny and Anderson Spickard III  to create a new educational support system for Vanderbilt medical students, known as KnowledgeMap. Dr. Miller was the founding Principal Investigator on Vanderbilt’s NIH-sponsored Training Program in Biomedical Informatics.

Dr. Miller served as President/Board Chair of the American Medical Informatics Association (1994-95) and President of the American College of Medical Informatics (2003-04). He received a 1997 FDA Commissioner's Special Citation for his work on clinical software evaluation.  He served as Editor-in-Chief of the leading journal in Biomedical Informatics, JAMIA, from July 2002 through December, 2010.  Dr. Miller served on the Editorial Board of the Annals of Internal Medicine, 2000-2003.  He served on the National Library of Medicine Biomedical Library Review Study Section (two terms) and the AHCPR Health Care Technology Study Section.   In 2004, Vanderbilt made him a University Professor, and provided an endowed chair.  He received Vanderbilt’s 2004 William J. Darby Award for Translational Research. In October 2006, he was elected to membership in the Institute of Medicine, of the National Academy of Sciences.  He received the American Medical Informatics Association’s Lindberg Award for Innovation in Biomedical Informatics in 2007, and the Phillip S. Hench Distinguished Alumnus Award from the University of Pittsburgh School of Medicine in 2008.  Over his career, Dr. Miller has been Principal Investigator on NLM/NIH grants and contracts totaling over $30 million. He has authored over 130 peer-reviewed publications.

He also authored a series of articles and book chapters on ethical and legal issues posed by using clinical information systems. In 1988, he received the University of Utah’s first Priscilla Mayden Award in Medical Informatics for his work on Quick Medical Reference (QMR), the successor to INTERNIST-I. Dr. Miller served as PI for the University of Pittsburgh's participation in the National Library of Medicine's Unified Medical Language System (UMLS) Project (1986-1994). He was founding PI on Pitt's NIH-sponsored Training Program in Medical Informatics.