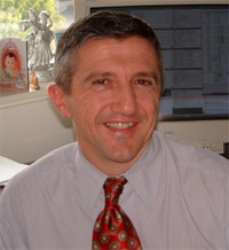 Dario A. Giuse, Dr. Ing., MS, is Associate Professor of Biomedical Informatics in the School of Medicine.  He has long-standing research interests in the application of computer systems to facilitate real-world work processes. After joining the faculty of the School of Medicine at Vanderbilt University, he spearheaded the effort to implement the StarChart electronic patient record system and the StarPanel EHR,. The systems provide an integrated, longitudinal patient record that contains all structured data, free-text documents, reports, and scanned images for both inpatient and outpatient encounters. The system is used interactively via a Web front-end for clinical patient care and research, and as the back-end repository for automated decision support tools. StarPanel was the VUMC EHR from 2001 up to 2017, when the eStar system became operational.  His current activities center around the Health Data Repository (HDR) and the Word Cloud.  The HDR is the logical extension of the Star repository and stores all historical and current data, documents, and images.  The Word Cloud builds on the HDR by providing automated NLP-based extraction of all relevant clinical concepts from documents (and optionally images via OCR) in real time, resulting in the conceptual, time-based indexing of all clinical documentation using the UMLS terminology.

During his 14 years on the faculty of the School of Computer Science, Carnegie Mellon University, he was involved in long-term research projects on human-computer interaction, constraint-based object oriented programming, computer aided design, computer system architecture design tools, and interactive computer graphics. His graduate research was in the area of synchronous controllers for multi-arm industrial robots.

He has served as a member of the editorial board of Artificial Intelligence in Medicine, the Regional Editor of Computer Methods and Programs in Biomedicine, and as the co-chair of IMIA Working Group 10 on Health Information Systems.

Dr. Giuse received an M.S. in Pure and Applied Mathematical Logic from Carnegie Mellon University and a Dr.Ing. ("Dottore in Ingegneria") degree from the Politecnico di Milano, Milan, Italy