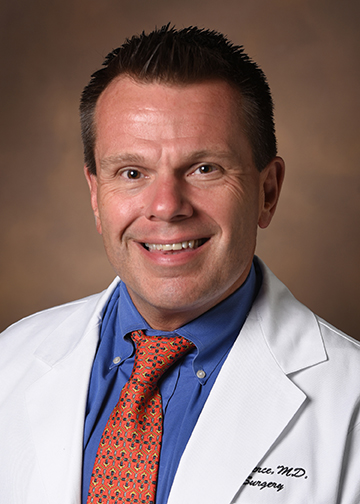 Dr. Pierce is originally from the New York/New Jersey area, but primarily grew up in Northern Virginia just outside of Washington D.C.  He earned his Bachelor’s of Science degree from Duke University with a double major in Zoology and Russian and a Certificate in Molecular Biology.  Dr. Pierce then attended the University of Virginia for his graduate work, completing a combined MD/PhD program in 2002.  He earned his PhD in Microbiology and Immunology, with a focus on the Human Major Histocompatibility Complex and the identification of peptide antigens involved in melanoma recognition and bone marrow transplant rejection.
He went on to perform his General Surgery Residency at Washington University in St. Louis.  While there, he spent 2 additional years in the laboratory of Dr. Brent Matthews studying the etiology and treatment of routine and complex hernias, as well as advanced topics in general minimally invasive surgery.