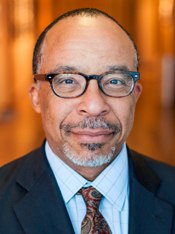 Michael R. DeBaun, MD, MPH, is a Professor of Pediatrics and Medicine at Vanderbilt University School of Medicine, JC Peterson Endowed Chair, and founder and director of the Vanderbilt- Meharry Sickle Cell Disease Center of Excellence. For over 25 years, his research on sickle cell disease has led to fundamental changes in understanding the clinical epidemiology, pathogenesis, and treatment of strokes and silent strokes in children and adults with sickle cell disease. He has been the principal investigator or co-leader of eight NIH or foundation-funded controlled clinical trials designed to prevent strokes in children or adults with sickle cell disease in North America, Europe, and Nigeria. Dr. DeBaun is an elected member of the National Academy of Medicine (2009). Based on his significant contribution to advancing the care of children and adults with sickle cell disease, he received the prestigious international 2014 Ernest Beutler Prize and Lecture in Clinical Science from the American Society of Hematology. Dr. DeBaun has received two international mentoring awards: the Maureen Andrews Award from the Society of Pediatric Research (2017) and the American Society of Hematology Clinical Science Research Mentor Award (2019). In 2019, he received the Stanford University Medical School Lifetime Achievement Award.